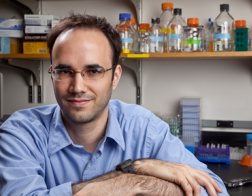 Shawn Douglas, PhD, is one of 102 researchers recently named by President Obama as a recipient of the Presidential Early Career Award for Scientists and Engineers (PECASE).

Douglas, an assistant professor of cellular and molecular pharmacology, will receive the award in recognition of his groundbreaking bio-nanotechnology work using DNA origami. The future PECASE funding from the Department of Defense will support his continued efforts to develop biomedical applications of bio-nanotechnology.

“Our research revolves around a fundamental engineering challenge: how to design and manufacture atomically precise materials of custom shape and function,” said Douglas. "Nature offers endless inspiration for what is possible, but is missing any instruction manual for those of us who want to build completely new things. So we start with the same basic building blocks (DNA, RNA, and protein), and through trial and error figure out how to put them together in the lab.”

The award is the highest honor given by the US government to outstanding science and engineering professionals beginning their independent research careers. Winners will be honored at the White House and receive grants of up to five years to advance their research.

“Shawn Douglas is one of the most innovative scientists I know," said Wendell Lim, PhD, chair of the Department of Cellular and Molecular Pharmacology. "He has developed an incredible range of tools for using DNA as a material to build microscopic structures. His work is opening up completely new ways to build nanoscale devices that could have broad impacts in medicine and beyond.”

In a White House press release, President Obama said, “I congratulate these outstanding scientists and engineers on their impactful work. These innovators are working to help keep the United States on the cutting edge, showing that federal investments in science lead to advancements that expand our knowledge of the world around us and contribute to our economy.”

Thirteen federal departments and agencies provided recommendations to identify scientists and engineers who show exceptional potential for leadership in the future of scientific knowledge and contributing to the awarding agencies’ missions. Awardees are selected for their pursuit of innovative research at the frontiers of science and technology and their commitment to community service as demonstrated through scientific leadership, public education, or community outreach.

He is enthusiastic about sparking the curiosity of undergraduate students to learn about his field. “I'm very interested in encouraging the next generation of young scientists and engineers to gain hands-on experience with bio-nanotechnology. While I was a postdoc at the Wyss Institute at Harvard, I founded an annual design competition for college students called BIOMOD.”

The competition is entering its seventh year and over 1,200 students have participated to date. It has relocated to the Bay Area and is hosted at UCSF each year in late October.

A video featuring Douglas as he explains bio-nanotechnology and his lab’s work: