'You Will Become Well': Delivering Patient Care in the Navajo Nation 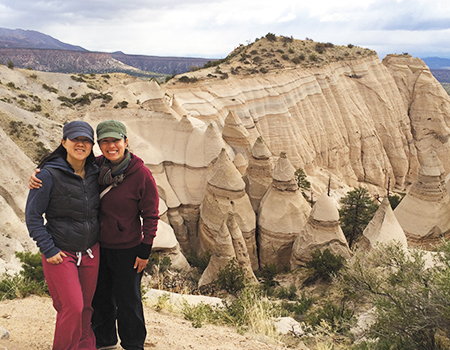 For Mia Lozada, MD, and Jennie Wei, MD, MPH, a third of their patients live in homes without plumbing or electricity, most roads are unpaved and hitchhiking is a major form of transportation. But Lozada and Wei do not live in a developing country — they are physicians for the Indian Health Service (IHS), providing free health care to patients of the Navajo Nation at Gallup Indian Medical Center (GIMC) in New Mexico.

"I use almost every single thing I learned in residency on a daily basis," says Wei. She and Lozada were residents in the UCSF San Francisco General Hospital Primary Care (SFPC) program, which trains physicians to become leaders in caring for underserved populations. GIMC has a 99-bed hospital and about 60 providers, including general surgeons, dentists and optometrists. However, patients must drive several hours to see specialists such as pulmonologists, gastroenterologists or rheumatologists, so Wei and Lozada draw on a breadth of skills from residency to provide as much care onsite as possible.

They also serve as field-based mentors for UCSF's HEAL Initiative global health fellows, who alternate between rotations at GIMC and postings in countries including Haiti, India, Liberia and Mexico.

Their patients bring a particular mix of strengths and vulnerabilities. Navajos have an extremely strong kinship system, and homelessness is virtually nonexistent. However, they are more than twice as likely as the average American to live in poverty, and are genetically predisposed to certain rheumatic diseases. Many patients must drive 100 miles to buy fresh fruits and vegetables, and diabetes and obesity are widespread. Many Navajos worked in uranium mines, contributing to increased rates of lung disease, and uranium has contaminated some of the reservation's well water.

Alcohol abuse is a major problem, and Lozada and Wei have cared for many patients in their 20s and 30s with severe alcoholic hepatitis, some of whom die within a few months. "I had never seen this disease in such devastating frequency until I got to the reservation," said Wei. They and their colleagues are working to improve treatment of alcoholism through a combination of counseling, rehabilitation services and medication.

Because it can be challenging to recruit doctors, the IHS frequently hires physicians for short-term contracts, which means that patients often see a different doctor every few months. Lozada and Wei have worked at GIMC since 2012, and are starting to establish long-term care relationships with patients. "The longer we've been here, the more patients seem to open up," says Lozada. "Over time, these relationships have become even more rewarding and the therapeutic alliances even stronger."

In addition to building trust, she and Wei have learned more about Navajo cultural norms from patients and colleagues. For example, a firm handshake can be considered aggressive, and avoiding eye contact can be a sign of respect. Asking directly about illness is seen as wishing disease upon a patient, but folding in such questions during a physical exam can be more effective. A positive way to end appointments is using a Navajo phrase meaning "You will become well," indicating good wishes for their health. Providers can also refer patients to the Office of Native Medicine, which engages medicine men to conduct healing ceremonies in a hogan, a traditional Navajo structure located next to the medical center.

"One of the most important things I learned in residency was how little we as doctors can do sometimes," says Wei. "That's why it's so important to work as a team with social workers, case managers, nurse practitioners and others to keep patients as safe and healthy as possible." Public health nurses and community health representatives are vital members of that team, making home visits to take vital signs and conduct patient education. Because of transportation challenges that many patients face, they are the only health workers that some patients ever see.

From Residency to the Reservation

The seed for working with the IHS was planted when Wei spent a summer rotation as a medical student on another part of the Navajo reservation in Kayenta, Arizona. "The Navajo people were extremely warm and appreciative of our care," says Wei. "My mentor stayed there for 10 years, and I could see that her life was so rewarding."

Wei and Lozada chose the SFPC program because of its emphasis on social justice and dedication to underserved patients. One of Wei's mentors was the program's director, Sharad Jain, MD. "He allowed us to be innovative, yet held us accountable to our values," says Wei.

"Jennie was an outstanding resident, ensuring that her patients received the best possible care despite their medical and social complexity," says Jain. "In her current work, she continues to provide high quality and evidence-based care to vulnerable populations, and creatively works to address social determinants of health."

During residency, Wei worked at Lyon-Martin Health Services, a nonprofit clinic, and learned how to care for transgender patients and prescribe hormone therapy. In Gallup, the HIV doctor asked Wei if she would start a transgender clinic on the reservation. Many transgender patients went without health care because they feared discrimination, and bought hormones online or off the street that they took unsupervised.

Wei and her team now see such patients in a transgender clinic twice a month. "I've learned an incredible amount about Navajo traditional views on gender, which extend beyond the binary model to this third gender, called Nàdleehì," says Wei. "In the Navajo creation story, they are given very important places in society. Despite these traditional views, many still experience physical and emotional trauma."

"This clinic has been one of the most rewarding experiences," says Wei. "You talk to somebody for an hour about their experiences and struggles, and at the end they give you a hug and say, 'I am so happy you're here. I can't believe that we're able to have a service like this on the reservation.' We're very lucky at UCSF and SFGH to get this specialty type of training, and to help somebody in such a profound way."

One of Lozada's residency mentors was Claire Horton, MD, MPH. "Many times, I would talk with Claire about how I wanted to make things better, and she said, 'It really sounds like you like quality improvement,'" recalls Lozada. "She gave a name to my interests, and was instrumental in linking me up with clinics in the Bay Area to see innovative QI projects."

"Mia was an extraordinary resident — compassionate, intelligent and passionate about helping individual patients," says Horton. "She also worked on several projects during residency that significantly improved the way we deliver care at SFGH. She's taken that passion to her work in the IHS, and it's been a delight to see the way she is teaching and mentoring the next generation of physician leaders!"

Lozada now directs QI efforts in her department at GIMC, including a multidisciplinary team to reduce preventable hospital readmissions. She also led efforts to initiate Schwartz Center Rounds, a carefully structured forum that allows health care providers to discuss social and emotional issues they face in caring for patients and families. "It's been wonderful to get our staff together to talk about challenges that have been plaguing us, and accomplishments that get us excited," says Lozada.

"It's a privilege and a wonderful experience working with the Indian Health Service," says Lozada. "The relationships with patients and colleagues, and the sense of giving back to a population that has sacrificed so much, are what make us want to stay."

This story was first published in Frontiers of Medicine (Issue 20, Spring 2015).