Survivor On the Margins: Historic UCSF Transplant Patient Without A Home 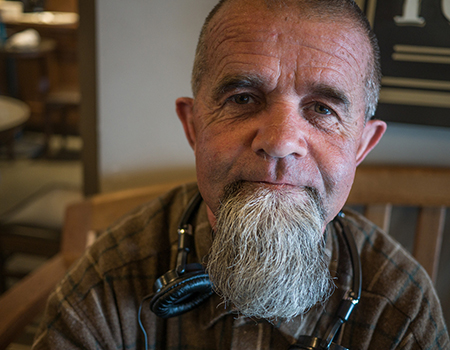 I first noticed Richard on a Wednesday before my 8am lecture, sitting in a corner of the nursing building’s food court. Or rather, it was the first time I really noticed him, because I realized I had seen him sitting there before, looking ahead contentedly with his hands folded on the table in front of him. Richard, it turns out, is a historic patient at UCSF; one of the first people worldwide to receive a kidney transplant. Born with renal failure in the early 1960s, Richard received his transplant at UCSF in 1971 at age ten, at a time when such procedures were rare and UCSF served as a pioneer in the field.

Richard’s transplant was performed by the renowned surgeon Samuel Lee Kountz, MD, a world leader in transplant surgery. After performing the first successful non-twin kidney transplant while training at Stanford University, Dr. Kountz came to UCSF in 1967 and ultimately built UCSF’s program into one of the largest and most respected kidney transplant programs worldwide. One quarter of all kidney transplants in the U.S. were performed at UCSF under his supervision, and before his death in 1981, he had personally led over 500 of these operations. 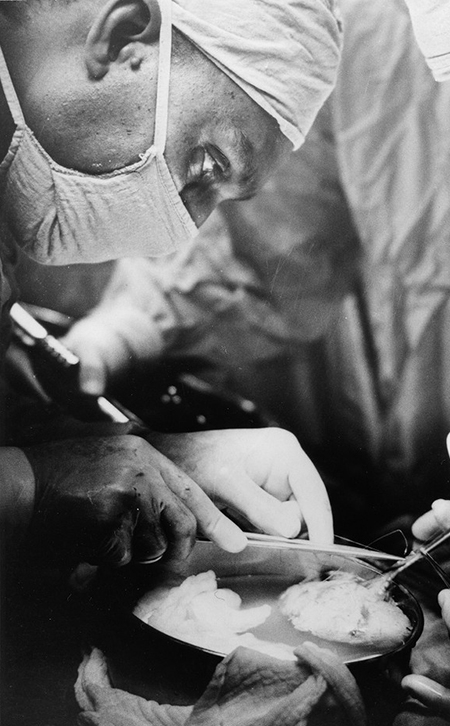 Reading through UCSF’s old press releases, I immediately appreciated the number of technological innovations Dr. Kountz pioneered and his impressive list of scientific accolades. Even more impressive is that he accomplished all this before and during the Civil Rights Movement, at a time when few doctors of color were seen in the field of surgery. In fact, he had been the first African American student admitted to the University of Arkansas for Medical Sciences.

But what struck me most were his quotes that emphasized the ‘human aspects’ of transplant medicine and the personal transitions a transplant catalyzes. In anticipation of the 1972 International Congress of the Transplantation Society, for which he served as President, Dr. Kountz announced, “What we want to do is document the non-scientific aspects of transplants from the patient’s viewpoint. Kidney transplants have been so successful that now they can be documented and patients can tell what it has meant to them, their families, and their lives.”

I thought of Dr. Kountz’s words as I spoke with Richard, whose transplant is undoubtedly a medical success. Before his transplant, he explains, “I was crying, peeing the bed, guessing I’m dying. And I could hear them talking, the nephrologist telling my parents, ‘The urine's backed up into his kidneys, his kidneys are destroyed, he's gonna die. I'm surprised he's not dead yet.’ All of a sudden, my mother's having seven weeks of testing.” His mother, Richard soon learned, was being tested to determine whether she could serve as his kidney donor. She could.

Immediately after the transplant, Richard remembers a striking change. “The kidney started working right when they put it in. I woke up with all this energy that I'd never had before. Because all you do when you have renal failure is sleep. You're tired and run down. When I awoke after the transplant, I could hear people in the operating room saying, ‘What an amazing transplant’. I woke up and I felt so… not powerful exactly. But felt so alive. Now I'm suddenly a kid at 11, 12 years old. I'm riding my bicycle, I'm going out in the sun, I'm being with my buddies. I'm feeling really alive.”

That was one of many transitions Richard experienced when he returned home after the surgery. He explains, “When you leave the hospital world here—cartoons, food, doctors, nurses paying attention to you—you go back to 'the root of awakening,' I call it. Trying to be a ten year-old kid, but you feel like you're going on 30. You grow up really fast.”

His parents were only beginning to grapple with post-transplant life. “There's a lot of heartache with parents that have sick kids. I'm getting better. But my mom was the donor, so she was still in pain and recovering.” Already poor before Richard’s healthcare needs and struggling to pay for follow-up visits after the surgery, his parents began fighting over money. When his father started beating his mother, Richard found himself in the middle, trying to explain to doctors why his mother was black and blue, and ultimately taking beatings himself to protect her. “I held it, I took care of it, somehow some way.” By his mid-teens, Richard’s parents had divorced, and Richard began living at a children’s home in Gilroy.

To manage his pain, he explains, “I found this magical thing called drinking. I drank myself out of a will, lost everything, lost almost everybody that I really wanted to love. I don't know how I kept the organ. Some would say you really don't deserve to be here today. True.”

After working briefly for NASA as a machinist at Moffett Field in Mountain View, Richard suffered his first epileptic seizure and stopped working. He moved to Indiana for several years, but returned to San Francisco in 1994 when he learned that a brain surgery might cure him of epilepsy.

He began working at the Fillmore Auditorium and the Warfield Theater. Even with the job, though, it became increasingly challenging to afford housing in the City. “The longest I lived in one place was about six years before being priced out in 2005 when rents more than doubled,” says Richard. First moving from the Inner Sunset to the Henry Hotel at 6th and Mission, Richard later found other temporary housing in the Tenderloin and China Town. Now, he uses Social Security checks to stay at Motel 6, and sleeps there until his money for the month runs out. “I’m still on the streets,” he says. “And I am trying to understand what's happened, because it feels like another failure in my life. I've always been the one that's persistent and believes I'm gonna make it and I'm gonna get through it. But it’s been a long time, way too long. I know it’s not my fault but it’s becoming painful.”

“My personal prayer—in soul and body and heart—is that if you have the time, you gotta make sure that the people who work at the hospital know that you're really grateful to be alive."

Talking to Richard, our conversation cycles through the same themes. In one moment he expresses immense gratitude for the hospital, the doctors, and the staff at UCSF. “My personal prayer—in soul and body and heart—is that if you have the time, you gotta make sure that the people who work at the hospital know that you're really grateful to be alive. You realize wow, the guy that I saw walking around in the blue uniform makes the bed go up and down. Wow, that guy makes my room clean so I don't get an infection or lose my organ. Wow that's the anesthesiologist. That’s the nurse, who is running intensive care units where a patient's hooked up to so many machines. The people that are polishing the floors and getting the operating rooms ready for you or me when we're having major surgeries. People that don't get to be recognized but they make a really big impact. I'm really grateful for them.”

In the next moment, he talks of lost opportunities, of botched possibility. He repeatedly mentions how he doesn’t feel like the model transplant patient, and asks me rhetorically, “How is it that the junkyard dog’s still living?”

I see someone, too, who craves to be seen for his role as a patient in UCSF’s transplant history, yet equally longs to be seen and heard as someone beyond his health conditions. “I'm not just a patient,” he emphasizes. “I have feelings. I like to eat food, I love to walk, I like to take pictures. I love music, I love beautiful, classic cars. I love dressing up nice.”

Just as Richard circles around these themes, I circle around the question of how to measure the success of his historic transplant. Dr. Kountz understood the importance of tracking patients’ post-operative experiences to see the effects of organ transplantation beyond pure physiology. He may have been ahead of his time for placing such emphasis on the social, financial, and personal effects that transplant surgery could have on a patient. And I can’t help but hold two feelings at once: that UCSF has served Richard well, and that the institution, the City of San Francisco, and I as a future physician owe him more. 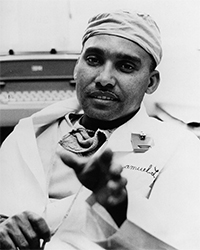