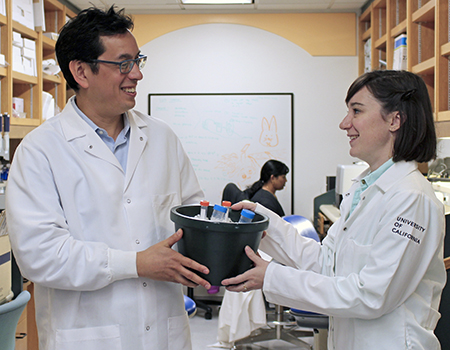 Scientists engaged in fundamental, curiosity-driven research are increasingly finding a home in UCSF’s clinical departments, conducting experiments that may lead to treatments for some of humanity’s most pernicious diseases.

For their approach, these researchers are taking advantage of breakthroughs in science and technology – from the mapping of the human genome and the discovery of stem cells to the invention of increasingly powerful machines for examining genes, proteins and other microscopic building blocks.

While UCSF’s basic science departments are not growing significantly, the clinical side of the University has the means to hire. A movement toward translational medicine is also encouraging research that can have an impact on patient lives.

“There is a growing opportunity for outstanding basic science to be done in areas that are very much human-focused and human disease-focused,” said Keith Yamamoto, PhD, Vice Chancellor for Research and Executive Vice Dean of the School of Medicine, citing “our advances in understanding, as well as victories of research and the amazing developments of technology.”

The trend is most pronounced in the Biomedical Sciences program (BMS), one of UCSF’s larger graduate programs.

“BMS was founded with the goal to do fantastic basic science that will have at its center an understanding of tissues, organs, organ systems, physiology and the way those things work together to create a functioning organism,” Yamamoto said.

Mark Ansel, PhD, the newest director of BMS, said the National Institutes of Health and other funders increasingly want to see “an emphasis on the health impacts of the research we’re doing.”

“That’s not inappropriate,” Ansel said. “We should be thinking about that. Basic scientists are happy to join in that research effort. I don’t want to say that we don’t still follow our curiosity. That’s the engine that drives the big advances in drug development and moves fields forward. But sometimes in research it’s an equally good option to have some kind of goal in mind with a disease-related perspective. It’s a good way to motivate experimental design.

“And basic scientists are learning that it doesn’t hurt to be asked to think about that,” he added. “It doesn’t mean that you throw everything down and try to do drug discovery. You can still do your fundamental research to understand how the biological systems work. But a lot of little decisions that affect your research focus and impact can be influenced if you have a disease or health perspective, and that’s not a bad thing.”

Students in the BMS program fit this new mold.

“Basic science is extremely important for advancing general knowledge, but I’m interested in the kinds of science we can readily apply to solve real-world issues like those of human disease and global health,” said Ivan Vujkovic-Cvijin. A PhD student, Vujkovic-Cvijin is working with UCSF scientists Joseph M. “Mike” McCune, MD, PhD, chief of the Division of Experimental Medicine and Susan Lynch, PhD, an associate professor in the Division of Gastroenterology. He added, “What motivates me is the thought of bridging what basic scientists have done and what clinicians want to do, in terms of improving the health of their patients. It feels like a relatively unmet need in the academic setting.”

Vujkovic-Cvijin’s dual assignments – working with McCune’s HIV patients and in Lynch’s lab – offer an example of how he’s making those connections. Because much of HIV research is done in humans and because Lynch was studying bacteria that live in humans as well as in smaller animals, he became interested in how the gut microbiome might influence HIV disease in humans.

“It turns out that HIV has a really profound impact on what bacteria live in the gut,” he said. “There are a lot of problems with HIV that modern therapy is not able to address. I had the theory that maybe these problems arise because of a change in what bacteria inhabit the gut. If indeed bacteria are a problem in HIV-infected people, if we modulate the bacterial community, maybe we can improve the health of HIV-infected people worldwide.”

His research is starting to bear fruit, with a paper (written with McCune, Lynch and others) published in Science Translational Medicine in 2013 showing the connection between intestinal bacteria and life-threatening diseases in HIV patients.

Doctoral student Laura Simpson also bridges that gap with her work in Ansel’s lab, looking at gene expression changes from asthma clinical samples. By partnering with clinicians Prescott Woodruff, MD, MPH, and John Fahy, MD, she said, “my project went from starting with clinical samples to getting back to basic questions, such as ‘What regulates T-cells?' and 'What makes them prone to induce inflammation in asthma?’ ” Her research was published in November in Nature Immunology.

“Asthma is one of these diseases where there’s a lot of treatment available, but we don’t have a full grasp of what’s causing it,” said Simpson, who believes that major scientific advances are needed. Instead of just treating the symptoms, she added, “It will be much better to prevent [asthma] or treat the underlying cause.”

Simpson knows about such advances. She was diagnosed with cystic fibrosis when she was born 28 years ago, when the life expectancy wasn’t much more than 20 years. Today, that has more than doubled due to modern scientific gains.

Rather than become a doctor (which was discouraged, as people with CF should not be exposed to germs that could cause dangerous infections), Simpson decided on a career devoted to science. “It really struck me that it was a little more exciting than being able to treat patients,” she said. “With research, you have the hope that you can help thousands of people. I’ve benefited from so much research. I want to do the same for others.”

A collaboration between a clinician and a basic scientist can flourish over time. The partnership between Mark Anderson, MD, PhD, a professor in UCSF’s Diabetes Center, and Matthias Hebrok, PhD, the center’s director, has resulted in exciting discoveries that have been published in prestigious journals.

As part of their joint work, Anderson and Hebrok received a grant from the California Institute for Regenerative Medicine to see if they could “coax stem cells to differentiate in culture to become resident cells of the thymus that educate and select T cells.” Anderson said, “That is a shining example of why UCSF is such a great place. I wouldn’t do it on my own, but a collaboration with a basic scientist is a formula for success.”

Yamamoto cautions that even though tremendous advances are bringing greater gains to patients, UCSF and other institutions must never pursue treatments at the expense of basic science. “We must immediately acknowledge that there is much to be learned,” Yamamoto said. “The amount we don’t know vastly outweighs the amount we do know. It is important to keep fueling this information bank from the basic science side.” 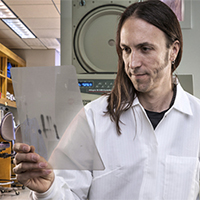 It was not all that long ago that Mark Ansel was a student in UCSF’s Biomedical Sciences Program (BMS). Ansel is now taking the helm as director. Read more
Basic scientists are finding their way into many parts of UCSF and helping clinicians better understand their patients’ diseases. In turn, basic scientists are learning from the clinicians’ experience with those patients on a day-to-day basis. Read more
Learn more about the Biomedical Sciences program