Science in Service of the Common Good 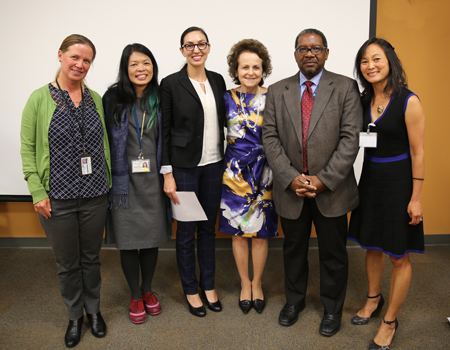 As a great public university, UCSF embraces its responsibility to serve the community – locally and state-wide, nationally, and even globally. The School of Medicine’s most recent Dean’s Forum on August 28 was a vivid reminder of the breadth and depth of a public mission that is “critical to who we are as a university,” according to Dean Talmadge E. King, Jr., MD. “The extent of our involvement in the community is amazing, yet a lot of it goes unnoticed,” he said. “One of our goals is to make this work more visible.”

Five featured panelists showcased initiatives that are changing and saving lives. Pamela Ling, MD, MPH, a professor in the Department of Medicine, studies tobacco industry marketing strategies. In her presentation, she illustrated how the industry targets segments of the population by developing images reflecting their values and self-perceptions, such as the “Marlboro Cowboy” for “traditionalists,” or “Virginia Slims” for “liberated” women. Analyzing these campaigns, Ling and her colleagues developed anti-smoking campaigns that use the industry playbook to appeal to young audiences. “Being in touch with the community is key,” she said. In one example, a “hipsters” campaign was co-created by young artists to ensure its images would be relevant to the intended audience. The FDA has developed similar campaigns for priority populations of high-risk teenagers. 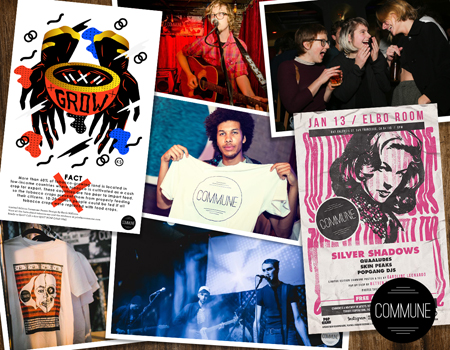 UCSF is home to the largest collection of previously secret tobacco industry documents – over 90 million pages in a searchable archive that is free to the public. Ling emphasized the value of this data to researchers worldwide. Since the archive's establishment, its documents have been cited in almost 1,000 scientific papers and helped shape global policy, including the WHO Framework Convention on Tobacco Control. As Dean King noted, the work of the Center for Tobacco Control Research and Education “may have saved more lives than any other thing we’ve done as a university.”

Claire Brindis, DrPH, the second presenter, is a nationally acclaimed health policy expert and the director of the Philip R. Lee Institute for Health Policy Studies. She also co-leads the Bixby Center for Global Reproductive Health, known for research that has, occasionally, been controversial. “We live in challenging times when it comes to women’s reproductive health and other topics, such as sex education in schools,” Brindis remarked. To influence policy requires translating science into facts that are persuasive to lawmakers, as well as to the public. For example, the Bixby Center conducted a long-term cost-benefit analysis of a California program that provides family planning services to low-income women. Over a period of just five years, it showed a return on investment of over $5 for every $1 spent. What can’t be quantified, as easily, Brindis stressed, is the impact on the lives of the women who averted unintended pregnancies.

Such research has paved the way for other policy changes in California, such as providing low-income women with 13 months instead of just one month of birth control. This policy has been adopted by a number of other states across the nation. Research findings also helped to pass a California law that mandates comprehensive and evidence-based sex education in public schools.

Brindis’ work led to her serving on a panel at the National Academy of Medicine, which made eight key recommendations that informed the Affordable Care Act. As a result, in 2016, 55 million women were able to access birth control services without out-of-pocket cost, “a career milestone,” Brindis noted.

The key role of partnerships was highlighted by professor of pediatrics and co-lead of the Child Health Equity Institute (CHEI) Anda Kuo, MD, who shared her presentation with Laurie Scolari, PhD, the director of the Our Children Our Families Council, with offices both at the Mayor’s Office and the San Francisco United School District. The Council is an important partner of CHEI, whose vision it is to make the Bay Area the healthiest place for all children and families by addressing the social and economic factors that impact health and well-being. “The vast majority of babies in the Bay Area are born healthy, but 50% of adults live with at least one chronic condition,” said Kuo. “The sooner we can intervene, the greater the difference we can make over the life course.”

While CHEI is a new umbrella organization, it is building on a foundation of work in progress on many fronts, creating new networks, advancing transdisciplinary and community-partnered research, and supporting innovative clinical programs across UCSF and regional stakeholders. “Child health equity is a complex problem and a team sport,” Kuo said. To make a difference requires collaborations with government, schools, and community partners. It also requires close listening. “We sat down with families over meals to ask them, 'What do you need to thrive in San Francisco?' ” said Scolari.

“We as academics need to listen to the community, to appreciate and learn what the other side is saying,” Dean King commented. “And to listen does not mean ‘waiting to talk.’ ” 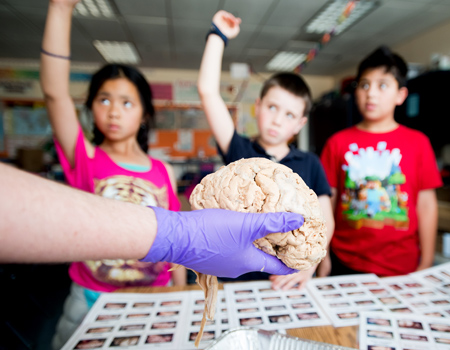 The importance of partnering with community leaders was equally underscored in the final presentation by Katherine Nielsen, MS, MA, who co-directs the Science & Health Education Partnership, an organization that recently celebrated its 30th anniversary.

Each year, 200 UCSF volunteers – faculty, trainees and staff – spend over 10,000 hours with K-12 students and their teachers to bring hands-on science lessons to the classroom. As a result, nearly every child in the city’s public school system connects with a UCSF teacher at some point during their schooling. SEP also hosts the Bay Area Science Festival, which attracts some 75,000 people each year.

SEP’s outcome data show the impact of their programs. They hear from former students how years later they still remember the UCSF scientists who came to their classroom, and how the encounter influenced their life paths and led them to pursue science and health careers.

Nielsen pointed out that the benefit is mutual, with all parties learning in the process. UCSF volunteers become better teachers and communicators, while teachers in the SFUSD deepen their scientific knowledge.

“A single comment to a young person can change their lives,” Dean King noted in his concluding remarks. “One of the things that is striking to me, looking at all our public service programs, is how even brief interactions can make a real difference.”

He also pointed out how these four initiatives demonstrated that science really does matter and can be used to prove that our interventions are effective and save lives.

Learn more about UCSF’s partnerships with our community: