Our reporter-at-large, Jeffrey Chen, is a second-year medical student at UC San Francisco

Saba Saba: A Summer in the First Emergency Department of Dar es Salaam 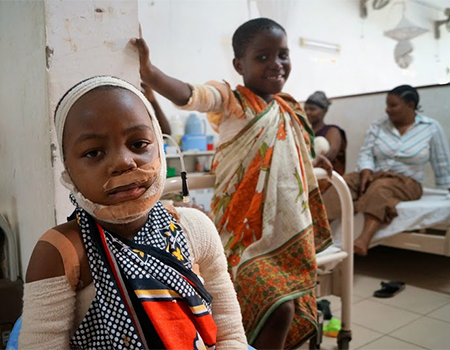 A young patient at Muhimbili National Hospital in Tanzania. Many patients in the pediatric burn unit first pass through the emergency medicine department, where they are stabilized before the long road to convalescence.

On July 7th, nearly everybody in the East African nation Tanzania took a day off work to celebrate Saba Saba (“seven seven” in Swahili). Sixty years ago on this day, a young high school teacher named Julius Nyerere founded the Taganyika African National Union (TANU). Prior to this event, most of East Africa had been divvied up into colonies and slave waypoints controlled by various European and Middle Eastern powers. TANU became the main political party in the struggle for Taganyika’s independence. Seven years later, Taganyika gained its independence from the UK and later joined Zanzibar to form the modern nation of Tanzania.

Fast forward to 2014 in Dar es Salaam. In this bustling port city, tin-roofed shacks line the cracked roads on which crowded, hot minibuses shuttle passengers from stop to stop. Barefooted hawkers amble around traffic lights waiting for stopped vehicles, offering Coca-Cola, peanuts, tissues, headphones, SIM cards, plastic trinkets, soccer balls and hats. An estimated 70% of people here live in slums, many without running water or electricity. Sewage and waste fester along overflowing gutters in many of these areas, while mansions sit on top of nearby cliffs overlooking the glimmering turquoise waters of the Indian Ocean.

Serving the four million residents of Dar is Muhimbili National Hospital, a large complex of medical buildings with an affiliated medical, nursing, pharmacy, and dental school. Here, various departments reside in different buildings: orthopedics in one, followed by cardiology next door, which leads to pediatrics. Much like UCSF, Muhimbili is a tertiary referral center, where all hospitals in the country send their most complex, sick patients for care.

Until recently, however, patients with emergency conditions had no central place to go. If a street hawker were to be hit by a truck in the middle of the night, she might be seen at a hospital where the only doctor on staff has zero experience with trauma. If a child were to get seriously burned (a sadly common occurrence, as many families are unable to afford proper stoves and end up cooking on the floor), he might see a doctor who has never learned to estimate body surface area and calculate the corresponding rate of fluid resuscitation. 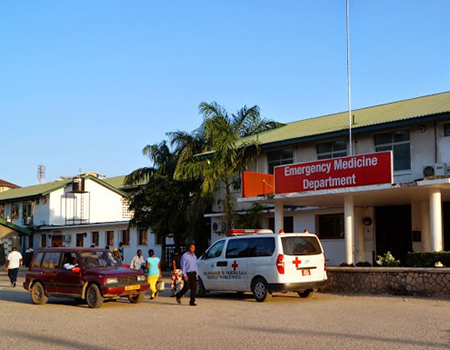 Today, an emergency medicine department (EMD)—the first and only in all of Tanzania—sits just beyond the entrance gates to the hospital. Opened in 2010 in a partnership between Muhimbili National Hospital, Tanzania’s Ministry of Health and Social Welfare, and the Abbott Fund (the foundation of the healthcare company Abbott), the EMD has doctors and nurses ready to see any patient who arrives at the doors. In one room, a man lies stoically silent, having escaped his car crash with “just” a broken arm, dislocated shoulder, and a large gash over his eye; in the next room, an almost-mother wails as she discovers that her baby has died in her womb; in another, a man with uncontrolled diabetes hyperventilates to blow off the acid in his blood; and in the following room, a feverish infant writhes as nurses place an IV, while a badly burned toddler watches quietly from the next bed.

Soon after the opening of the EMD, the Abbott Fund engaged UCSF to direct a five-university consortium to support training at the site. Since 2010, UCSF emergency physician Teri Reynolds, MD, MS, PhD, has split her time between UCSF and Tanzania, serving as the Muhimbili residency program director. Initially, the EMD was supervised year-round by at least two foreign board-certified emergency physicians. Now, the department has six local EM specialists, and six more completed their residency training just this month.

The ultimate goal of building a residency program from the ground up is to create a sustainable emergency medicine program in which Tanzanian doctors and nurses will be training fellow Tanzanians. To help develop the department, the consortium of American and South African universities frequently send nurses, residents, and faculty to mentor the dedicated providers at Muhimbili’s EMD. The program is thriving and will transition fully to local leadership in January 2015.

With support from the Dean’s Summer Research Fellowship and the mentorship of Dr. Reynolds, I have the privilege of spending my summer working in Dar, collaborating with the doctors at the EMD on an ultrasound research project. I’ve met some incredible people here. There are the charge nurses who work furiously to keep the department in order. There is the resident from the war-torn Democratic Republic of the Congo who hopes to go back in two years as the first native residency-trained emergency physician in his home country. There are the residents, nurses, and faculty who spend months away from home in the US to mentor the providers here. And of course, there are the patients who, despite their severe illnesses and injuries, manage to remain stoic and grateful in the face of so much pain.

This is only the beginning. 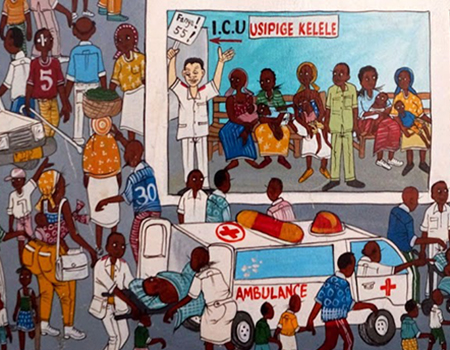