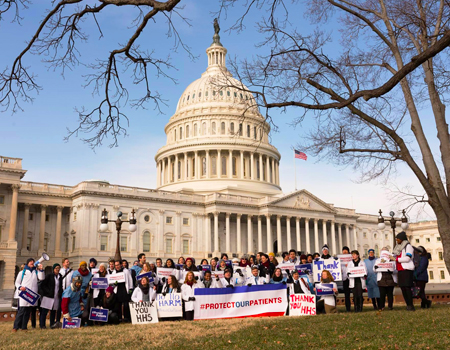 Medical students from across the country met with Congress members at the US Capitol as part of the #ProtectOurPatients campaign.
Photos: Fabiola Molina

“Do no harm.” This is the guiding principle by which we as healthcare professionals practice, the core of the oath we took as incoming medical students four years ago, and the tenet of medicine that continues to inspire us in our care for our patients.

As recent events have threatened to jeopardize healthcare coverage for over 30 million Americans, “Do No Harm” has become a rallying cry for providers across the nation. Doctors, nurses, allied health professionals, and students from all health fields have united to defend the Affordable Care Act (ACA) against repeal without replacement.

These shifts in the political environment have galvanized multiple advocacy groups into action, many with members of the UCSF community at the helm. Locally, there is #KeepAmericaCovered, led by UCSF resident physicians and students. This movement is part of a larger social media campaign to rally for continued access to care for all patients. All over the country, similar organizations at other medical institutions have emerged. Central to all groups is the idea that doing no harm applies outside of strictly clinical settings — that it is important for providers to advocate for the patients and communities we serve, both inside the hospital and out.

Currently, such groups exist at over 50 medical schools nationally. They are united under the banner of #ProtectOurPatients, a grassroots movement of future health professionals. The group is co-organized by Sidra Bonner, a UCSF medical student currently pursuing her MPH at the Harvard T.H. Chan School of Public Health. #ProtectOurPatients has been active both locally and nationally, with a mission that opposes outright repeal of the ACA without replacement, instead of demanding a bipartisan effort to improve it.

Per the campaign, “this is a matter of life and death” for many patients, and members ask simply that “our representatives put patients over politics.”

The movement has grown immensely from its beginnings in late November. It hosted a national day of action on January 9, with 31 medical schools holding events simultaneously. In San Francisco, physicians, nurses, and health students donned white coats and linked arms outside of Zuckerberg San Francisco General. A 30-second moment of silence was held in honor of the 30 million Americans who would lose coverage without the ACA.

Adali Martinez, a UCSF medical student currently pursuing her MPH at UC Berkeley, addressed the crowd with a personal story about the ACA’s effects. “My mother, a single parent of three, worked for decades as a housekeeper. Her health suffered due to years without health insurance until 2013, when I helped her sign up for Medi-Cal with the ACA. I want to make sure that she continues to be covered, just like many of the patients we see here at this hospital.”

Dane Brodke, also a UCSF medical student pursuing his MPH at UC Berkeley, co-developed a phone app to promote the campaign on social media. The app provides a photo frame with the hashtag #KeepAmericaCovered with buttons to directly share pictures over Facebook or Twitter.

“The app is an easy way for everyone to get involved with the movement by sharing photos and stories on social media about how the ACA has helped people,” Brodke explains. “The #KeepAmericaCovered movement is about engaging trainees in an effort to keep moving forward with healthcare in America. Many trainees recognize their role as broadly promoting a healthy society, not just treating diseases as they arise.” 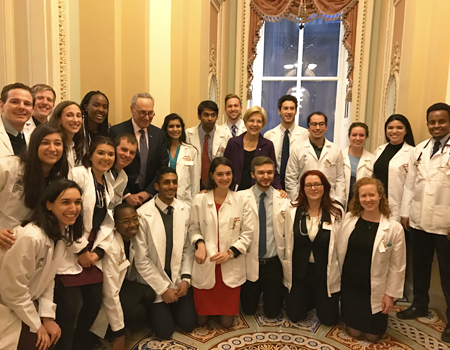 That same day, over 60 medical students traveled to Washington D.C. to protest outside of the Capitol Building, including Bonner, Hank Song, and Fabiola Molina from UCSF. Visiting the offices of all 100 U.S. senators, they delivered a petition signed by over 4,500 health students urging Congress Members to “do no harm” and to maintain key portions of the ACA. They also sat down with 21 Senate staffers and two Republican senators for further discussion. Additionally, these students broadcasted a Facebook Live event, hosting multiple senators to discuss the impact of ACA repeal without replacement.

Uniting and Engaging on Multiple Levels

Since then, the #KeepAmericaCovered and #ProtectOurPatients movements have continued to engage in advocacy. Most recently, #ProtectOurPatients spearheaded a January 30 #DoNoHarm event involving over 40 medical schools nationwide. Schools across the country had all-day phone banks, rallies and vigils. The phone bank at UCSF, organized by medical student Erin Duralde, drew over 30 participants who completed over 200 phone calls.

“We recognize that the medical community must advocate for truly patient-centered policies and that it is important to provide students with opportunities to engage with elected officials,” Bonner says about #ProtectOurPatients.

Another particular strategy the movement focused on was bringing together geographically linked schools to hold massive events. For example, in New York City, hundreds of medical students and faculty from area medical schools held a white coat die-in, representing the 43,000 lives that would be lost annually should the ACA be repealed without a replacement.

So, where to next? Bonner states that future directions for #ProtectOurPatients depend on how the health policy landscape continues to change. Still, she says, “It has become increasingly clear that medical trainees need an avenue to engage with a range of policies that will impact our patients, our communities, and our families in the coming months and years. I think many of us who have seen #ProtectOurPatients grow from a conversation to a movement believe that our generation of clinicians needs to be engaged in social and political advocacy.”