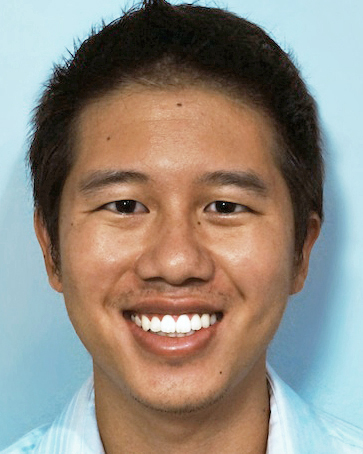 A Night at the UCSF Homeless Clinic 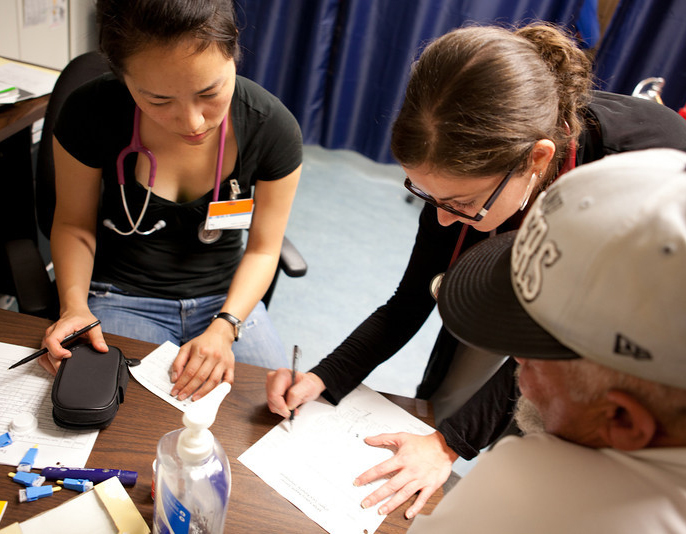 At the UCSF Homeless Clinic, students work with preceptors to provide medical care for some of the men and women who need it most in San Francisco.

The first time I go to the St. Vincent de Paul Society of San Francisco, I leave my white coat at home.

The Society provides shelter for over 400 transient men and women each night. It’s also the location of the UCSF Homeless Clinic, which is where I’m headed tonight, dressed in jeans and a t-shirt. Many of the men and women who come to the clinic have had negative experiences with healthcare providers in the past. A white coat may be the last thing they want to see.

People come to this shelter in the South of Market neighborhood to find reprieve from the vicious cycles of homelessness, violence, and substance abuse that they encounter on the streets. Here, they are able to get help, whether it’s to find permanent housing, employment, education, or simply a warm bed to stay for the night and food to sustain them through the day.

And since 1992, on every Tuesday and Thursday night, these men and women have been able to get free medical care right at the shelter.

Since its founding 22 years ago, the UCSF Homeless Clinic has drawn medical students and local community physicians to volunteer their time caring for the patients most in need in San Francisco. Since then, the clinic has expanded to include nursing, pharmacy, premedical, and even law students. 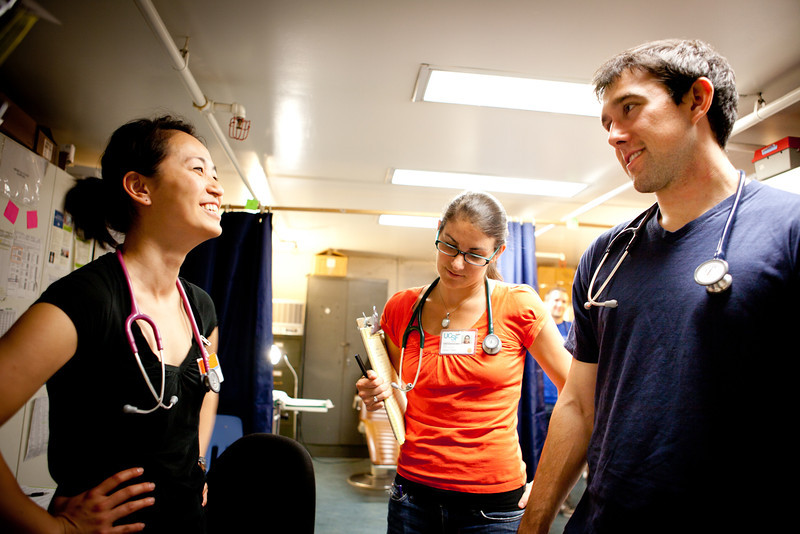 Each group has their role: pharmacy students, for example, will help patients go over their medication lists and help them figure out how to stick to their regimens, while premedical students will help coordinate referrals to San Francisco General Hospital, the Tom Waddell Clinic, or other local health centers that focus on care for indigent populations.

Because some patients have needs that are hard for the biweekly general clinic to address, students now also hold a dermatology clinic one Tuesday a month and a women’s clinic 1-2 Sundays a month.

As we walk in the doors of the shelter, our stethoscopes set off the metal detectors, loudly declaring our arrival. Before we cross the room to set up shop, a few residents approach us, asking if they can be seen. One man needs help with his diarrhea, which has been keeping him up at night; another with his swollen, painful toe.

Matt Bald, a second-year student and veteran volunteer assures them that we’ll be back to check on them as soon as we’re set up. I will be shadowing Matt throughout this night.

Another student, Ethan Hua, serves as tonight’s clinic coordinator. Coordinators manage the overall flow of the clinic, making sure there are enough supplies and equipment and that everything runs smoothly. They are also trained to check blood sugars with a glucometer, administer PPD (tuberculosis) tests, and draw blood for a new STI testing initiative. They can also administer naloxone (Narcan) if someone shows up having overdosed on an opioid, and they know how to screen for sensitive mental health issues.

Ethan has a steady stream of patients waiting to have their PPD tests placed or read. This is a particularly important public health role of the clinic, as tuberculosis can spread rampantly through vulnerable populations such as the homeless. Anybody testing positive on this simple skin reaction test is referred to SFGH, where they can get a chest x-ray and treatment. 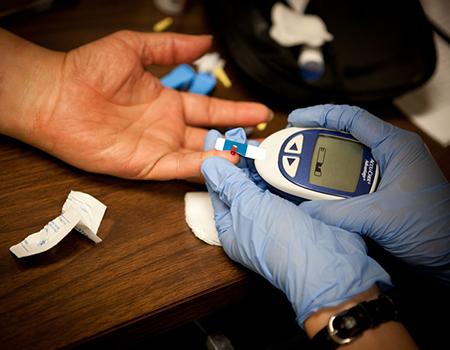 Our medical preceptor for the night is Dan Ciccarone, MD, MPH, a professor in the Department of Family and Community Medicine at UCSF.

“The role of the preceptors at Homeless Clinic is really to just stand back and let the students do the work,” explains Dr. Dan — as students popularly know him — before the clinic starts. “Do your history and physical, and call us when you’re done. Don't rush. Take this opportunity to really listen and learn more about the stories of your patients and how they got to where they are today.”

Soon after we break, Matt and I go to talk to the shelter residents who’d approached us when we first came in. Moe*, the man complaining about diarrhea, is lying on his side in bed #83, clutching a bottle of red Gatorade.

“Moe, how are you feeling? We can come see you right now in the back,” Matt offers.

“Oh, thank goodness,” replies Moe weakly. He follows us into the room where we hold our clinic. We draw our curtain shut, sit down, and listen to his story.

Moe has been experiencing diarrhea for four days, and it’s been disrupting his sleep. In fact, many of the other men in the shelter have been running to the toilet in the middle of the night too, and he suspects there is some bug going around. Over the past day or so, he says, he’s felt especially weak and dehydrated, hence the Gatorade. “I’m miserable, guys. My stomach hurts all day long, and I can’t get any sleep at night when I gotta keep running to the bathroom.”

Matt performs the rest of his history and physical. We learn about Moe’s life -- how he used to be a caregiver in a nursing home, until a family drama sidetracked him. From there, life went on a downhill spiral until he ended up homeless. He’d seen a few terrible things while he was a caregiver, which led him to distrust the medical system as a whole. “But you guys seem alright,” he tells us.

Matt finishes his history and physical, and I bring in our preceptor, Dr. Dan, who immediately connects with Moe with a smile and a joke. Matt presents our patient, going through the pertinent positives and negatives from his exam. After a bit of discussion, we conclude that Moe must have contracted norovirus, the most contagious and most common cause of acute gastroenteritis, or “stomach flu,” in adults in the US. We give him a pack of Imodium and lots of advice to stay hydrated.

“Thanks a lot guys,” says Moe, a smile on his face. “I really appreciate it.”

Now it’s my turn. I go find the man who’d been complaining about his newly sore and swollen toe. Obrad* looks to be in a lot of pain when he walks, yet he refuses to take the elevator and insists on limping down the stairs. Once again, we go to the back corner of the clinic room and draw the curtains shut, before I start the history and physical.

Obrad had been walking down Market Street the previous day when his right toe began to hurt out of nowhere. Now it’s swollen, warm, and red; he can barely walk or even stand the impact of water hitting his toe in the shower.

I ask about his background, and he tells me he moved to San Francisco only a few days ago, after thirteen years in Atlantic City, where he’d worked as a bouncer at a casino. He had immigrated from Serbia to find a better life with better opportunities. But now he couldn’t even walk around outside to find a job because of the sudden, debilitating pain in his toe.

Matt calls in Dr. Dan, and I present the case to him. “So what do you think Obrad has, Jeff?” he asks. My mind races. “Arthritis? A joint infection? There’s no evidence of any trauma or bug bites or any broken skin. I have no idea,” I admit, brandishing my first-year “I don’t know!” card.

“This is the classic presentation of gout, Jeff.” Dr. Dan explains to Obrad what gout is and how we plan to treat it. I, the first-year medical student, listen just as intently as our patient. We wrap an ice pack around his toe and give him some ibuprofen.

“Thank you so much,” says Obrad, shaking our hands with a strong grip.

At the end of the night, we sit down to write our notes and get feedback from Dr. Dan. We check off our primary diagnoses—norovirus, gout—on the billing form (to be processed by Healthy San Francisco) as well as our secondary diagnosis: lack of housing. Once everyone finishes, Ethan gathers all the volunteers around in a circle to debrief—a Homeless Clinic tradition. What is one thing we’ve learned tonight?

Just one thing? I’ve learned so much in the last few hours, it seems impossible to choose.

I’d written a 110-page senior thesis about noroviruses in undergrad, but now I’ve actually seen first-hand how noroviruses could cause real misery in one man named Moe and some of his fellow residents at the shelter. I’d heard of gout only once before, yet here, a day after my foot anatomy lab, I had helped Obrad figure out what was causing his pain. Now he would be able to walk out of the building and find a job.

Most importantly, I’d taken leaps and strides in my journey learning to care for patients by listening to their stories, understanding where they came from and being there for them in times of need. Never had my life intersected with homeless men in a way that I could talk to them extensively. Learning Moe and Obrad’s stories helped me understand my own perceptions and biases.

“We didn't take on the societal inequities that necessitate places like St. Vincent de Paul,” continues Matt. “But I like to think that in those moments where we were able to meet a need, and do so in a kind and empathetic way, we leave people feeling that our clinic is a place where the students and educators care. It seems small, I guess it is small, but it's something.”

On our way out of the clinic, Dr. Dan puts on his public health hat. "Who wants to inform the staff about this local epidemic?"

The next time I go back to the shelter, both of my patients are no longer there. As a result, I’m not able to follow up. But, I’d like to hope that Moe recovered fine and that we’d helped curb the norovirus outbreak at the shelter. I’d like to imagine that Obrad’s toe isn’t flaring up too often and that he’s been able to walk around the city and find a job.

For all the others who need our help, my fellow students and I, along with our UCSF preceptors, will continue to sling our stethoscopes over our shoulders and head to St. Vincent de Paul.

*To protect patient privacy, names and some details regarding the patients in this story have been changed. 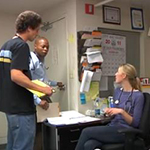 The UCSF Students’ Homeless Clinic is comprised of UCSF medical students, nursing students, medical residents, and physicians. The clinic has served a diverse group of homeless and transiently-housed people in San Francisco since 1992.