Navigating Without A Map – A First Generation’s Journey to Graduation 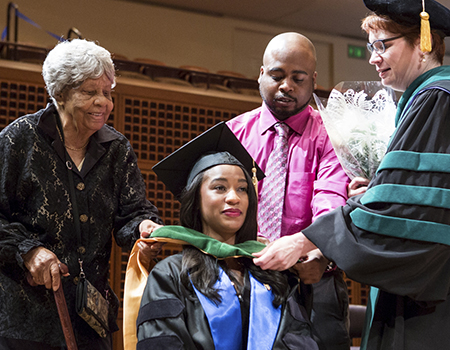 At the UCSF School of Medicine commencement ceremony on May 16, Sam Hawgood quoted Nelson Mandela and then tailored his words to the occasion: “Today, what might have seemed impossible at times is done!”

With these words, the interim chancellor and dean of the school acknowledged the long road that had led the Class of 2014 to that moment in Davies Symphony Hall. Among the 159 graduates, there was a subgroup for whom the term "impossible" seemed particularly apt. Some of them wore pins, declaring themselves as the first generation in their family to go to college. Their path to graduation included hills even steeper than those their peers had to climb.

Among them was Eric Seymour, who grew up poor on the Mississippi Gulf Coast. He described first-generation students as an “invisible minority.”

"I didn't even understand what residency was when I started med school," Seymour said. “I think about colleagues whose parents were physicians. They already had the vocabulary. I had to learn it. And people assume we all come from a particular background, and that our parents went to college. It's hard to speak up and say, 'My experience was different.' "

"These students have to bridge the culture of academic and professional aspirations and the culture of family and community," said Neesha Patel, PhD.

Patel is director of UCSF’s First Generation Support Services, which took shape two years ago to address the needs of students who are pioneers in their families, navigating uncharted terrain.

“There’s something really powerful about knowing some of your professors have trod the same path you have,” said Eric Seymour.

While acknowledging the challenges he faced as a “first gen” as well as being gay, Seymour is convinced that they will make him a better doctor, "It will help in the same way that being from any minority group gives you the capacity to see and feel differently — knowing that every patient's story is unique and deserves to be heard."

The Long and Winding Road

Like many first-generation students, the 31-year-old Seymour is a little older than the average graduate and didn’t follow an uninterrupted academic trajectory. After graduating from Yale, he worked in the Mississippi Delta with Teach for America.

"I saw poverty in a way I hadn't seen it before," he said. "I came back to my old idea of being a doctor and a physician leader. It's terrible but, once you have MD behind your name, people listen to you."

Seymour, who also has an MPH degree, was drawn to UCSF because of the PRIME program, a five-year track for students committed to working with urban underserved communities. During a pediatric residency at Seattle Children's Hospital, he'll spend four months each year in Alaska, learning its public health system.

JoJo Yang, a young graduate at 25, grew up in Irvine and went to UCLA. Her parents emigrated from mainland China in the late 1980s, and Mandarin was the main language in her home. Although her father is a chemical researcher who went to college, she strongly identifies as first generation, because she said she had to look beyond her family for support and direction after she entered medical school.

First Generation Support Services helped fill the void. Yang recalled a reception in the library with people from all professional schools at UCSF and at different levels of their careers. “It was nice to see that variety of backgrounds, to have exposure to it and know that they existed,” she said. “It was really comforting and great to feel that kind of empathy.”

The beginning of clinical rotations was especially daunting. “Going from the classroom to a hospital setting, from being in class to being dressed professionally, is difficult for all students,” Yang said. “But we don’t have that close family support of parents or older siblings who have specific suggestions about how to make that transition more gracefully.”

Fortunately, she found a mentor who was also first generation and a year ahead of her. “It’s been a huge asset,” Yang said. “Patients in general are overwhelmed interfacing with the medical establishment, especially parents with a very sick child. My personal background helps me know where my patients are coming from, especially when they’re confused trying to navigate the system and know who is doing what.”

Next month, Yang begins a residency in pediatric neurology at Stanford. 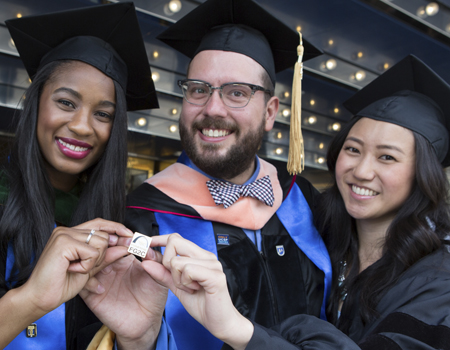 On the home front, first-gen students say, it’s almost impossible to convey what they’re going through. And in the academic realm, dealing with medical school is something else entirely, way beyond what’s involved in getting an undergraduate degree.

“The key difference is that you’re being socialized into a professional culture,” Patel said. “And it’s an implicit culture. You’re attending conferences, doing clinical rotations. How do you network? Do you hang around after a clinical rotation? Is that the norm? What’s expected?”

As another first-gen graduate, San Francisco native Victor Laluz, put it, “I had to learn the culture from scratch. It starts with how you dress and how you look. I just felt like I was out of the loop. There were nuances and subtleties that I never picked up on.”

Laluz, 29, lost his mother this spring. His father was a postal worker and Vietnam vet. He majored in psychology at UC Davis, but chose UCSF for medical school to stay close to his family.

“By the end, I think I figured it out,” Laluz said. “But I’ve seen how breezy some people’s paths have been. For those with doctors in their lives — roughly 50 percent of the class — things seem a lot easier. But a lot of them are very giving, and there’s a good cooperative spirit.”

He remembers the words of his surgical preceptor, Pierre Theodore, MD. “He said, ‘You know, Victor, you’re really a self-made man. You should be proud of that.’ That was such a nice compliment. It summarizes how I feel in terms of being a first-generation med student.”

Laluz will spend the next year working for Catherine Lucey, MD, vice dean for education, as an education fellow.

Backstage at Davies Hall, Jensara Clay looked cool and unruffled, but said she was actually frazzled. She’d gotten delayed in traffic returning from the airport after picking up friends and family who’d flown in from Los Angeles, Denver and Las Vegas. She had 18 guests at graduation.

The day before, she described the past four years. “It’s a different world,” said Clay, 30, who majored in biology at the University of Nevada, Las Vegas. “And until you find a mentor, you’re kind of recreating the wheel. Learning how to accept help and be a mentee is also a difficult task.”

Clay grew up in Denver and lost her father at age 3. She’s worked since she was 14 — everywhere from Taco Bell at an amusement park to a dry cleanders and a call center.

“I think I’ve always felt out of place,” said Clay, who is African American. “But being both first generation and a minority student, you have special experiences and struggles. It helps me even now connect with a lot of my patients and build rapport.”

For the next four years, Clay will be an ob-gyn resident at UCSF. Her ultimate goal is to work with people from disadvantaged backgrounds.

Leila Yeh Beach, the student who was chosen by her class to give the senior address at graduation, succinctly recalled how all medical students, first-gen or otherwise, have their crises of insecurity and rely on the support of their peers. On her first day of clinical rotations, three hours into medicine rounds, she fainted. A classmate broke her fall.

“Knowing that you’ll be there to catch me, literally and figuratively, is as comforting as it is cliché—and it is the one thing that gets me past the cynicism, anxiety, and crises of confidence,” Beach told her fellow graduates.

Read more about the organization and the other winners in the announcement.