Moving toward one UC Health 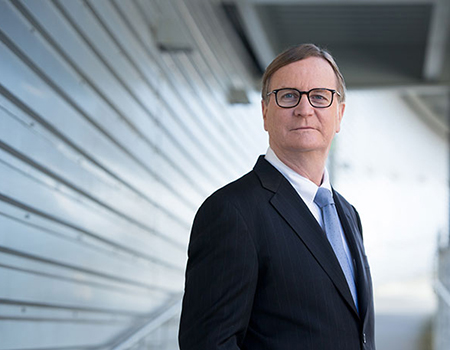 If they act separately, they can survive but will be marginalized in isolation, Hawgood said. If they work together, they can transform and grow.

Hawgood outlined his case for the latter option during his talk, “UC Health and the Future of Health Care,” at the UC Center for Health Quality and Innovation’s third annual colloquium May 2 in Oakland.

“If we truly acted as a system, we would be quite a force,” Hawgood said.

Health providers need to remain connected to the past but prepared to swing in new directions at this “hinge of history,” Hawgood said, borrowing a half-century-old phrase from former UC President Clark Kerr.

In other words, business as usual can’t continue. Academic medical centers can expect significant consolidation in the next decade as they struggle to meet their “triple threat” of clinical care, research and education, Hawgood said, citing futurist Ian Morrison.

What does this mean for UC Health and its five academic medical centers and 17 professional schools?

UC’s academic medical centers — Davis, Irvine, UCLA, San Diego and San Francisco — have been known for providing the most complex care, such as burn care and transplants, as well as conducting research and educating health professionals. That traditional model worked well in what Morrison characterizes as the volume-based first curve, where academic medical centers could be autonomous and focused on the short term. But the value-based second curve is coming, where the future will be focused on new technologies, new consumers and new markets.

As academic medical centers shift from the first curve to the second curve, they must transform their business and health care delivery models to balance quality, cost and patient preferences to achieve real value and outcomes while staying true to their three-part mission, Hawgood said.

For UC, that means moving beyond efforts to coordinate regionally, said Hawgood, who praised broader efforts such as the innovation center and “Leveraging Scale for Value” project to reduce costs at UC hospitals.

To thrive in the future, UC must do even more to act as a health system and move toward one UC Health, he said.

“We have tremendous opportunities,” said Hawgood, such as building a statewide strategy, making clinical and educational innovations, collaborating on translational research, branding and marketing, training the workforce, and impacting policy.

“The ‘second curve’ for UC is to take advantage of its leverage and power when acting as a system,” Stobo said. “In this new paradigm, UC Health and the UC system can truly be a national leader in clinical care, education and research to improve the health of society.”