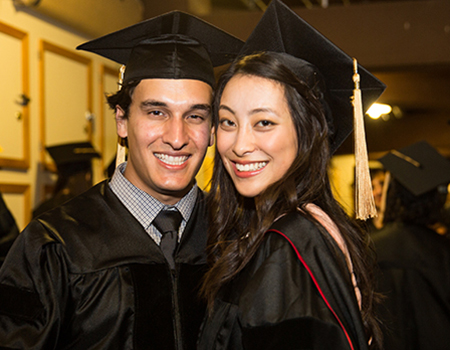 "The journey through medical school is long and difficult. Fortunately, no student has to travel it alone," said Talmadge King, MD, in his welcome at the School of Medicine commencement on May 15 at Davies Symphony Hall.

The words of the school's new dean had special resonance for those members of the Class of 2016 who were graduating with a fellow classmate as a partner. This year, there was an unusually large number of couples among the 178 students.

King urged the graduates to be good listeners -- to seek first to understand and then to be understood. In that respect, the medical student couples have had a lot of practice, as they move forward in the next chapter of their shared lives. 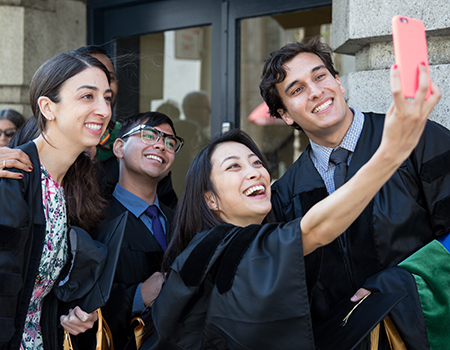 Brooke Su never had to debate the pros and cons of a relationship with someone in her field. When she started school in 2011, she'd already been dating a UCSF med student for two years.

"I actually have no frame of reference for not dating another medical student," Su said. "He was three years ahead of me and it ended early in my second year."

By the end of that year, she and classmate Erik Velez were dating. They started living together in 2014 during a gap year in Boston, where he did research and Su got an MPH at Harvard. In January, he proposed on Angel Island, where they'd gone on one of their first dates. He'll be doing a general surgery internship at Kaiser Permanente in Los Angeles and then a radiology residency at USC. She'll be a resident in otolaryngology at UCLA. Their relationship has buoyed their journey through medical school.

"There are a lot of great perks," said Velez, 25, of Anaheim. "Our lives are very hectic and it's not necessarily the long hours -- it's the uncertainty of the hours."

Su, 27, who grew up mostly in San Jose, said it's been a huge benefit to be involved with "someone who knows the ridiculousness of being a third-year med student and the demands on your time and being able to share candidly your passion for patient care."

"I was stuck on a case in my surgery rotation that was supposed to take two hours and instead took eight," Su recalled. "I got home at 10:30 at night and I had to get up at 4. All I needed was some sugar and someone to rant to. And there was no, 'Where were you? We had plans.' It was just, 'I get it.' When I was at my limit studying for the boards, I told Erik, 'I can't handle human contact, even you. I need two or three days to preserve my sanity.' Someone else might not have handled it as well.”

Both Su and Velez said the drawbacks of dating another medical student come with the benefits: total immersion in the medical world. It can produce extraordinary understanding, but also lead to imbalance and a distorted sense of reality.

Su said, "It makes it harder to step out of this world of medicine. For one thing, there's no sense of what's appropriate dinnertime conversation. I've seen it all, I've smelled it all. We have to reel ourselves back sometimes."

As daunting as medical school has been, they know residency will be far tougher. "We just have to be self-aware," Su said. "Things will get harder and we'll be more sleep-deprived. It's really great we have each other as a resource." 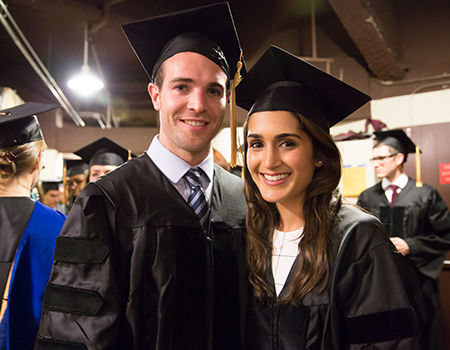 Shalini Dixit recalled her first date with Kevin Kane. He took her to the Local Edition, a downtown upscale cocktail bar. The second date was at Gracias Madre, a vegan Mexican restaurant, because she's a vegetarian.

"After that, most dates were studying and eating at home," Dixit said.

The 27-year-old Orinda native entered medical school in 2011, but graduated in the same class as Kane, who grew up in Riverside County, because she took a gap year. She'll be staying at UCSF for her residency, and he'll be heading down to Stanford University. Both will specialize in internal medicine.

"It's wonderful to date someone in med school," Dixit said. "There's unbelievable support. You really get to have a partner. We've gone through school together and applied for residencies together. It's nice to be starting a new chapter with someone."

That chapter will be challenging as Dixit will be moving to the Dogpatch neighborhood, close to her new base at Zuckerberg San Francisco General Hospital, while Kane will be in Redwood City.

"At least it's along the same freeway," said Kane, also 27, who expects to be seeing a lot of Interstate 280 in the next several years.

Although they both view their relationship as happily symbiotic, Kane said he benefited more, given that Dixit was farther along in medical school and offered plenty of useful advice.

"For example, she mentioned that grades during our third year are really important and have a very big impact on your residency application," he said. "Having that insight very early on really helped."

They value the empathy that comes with being involved with another med student.

"I'd feel a lot guiltier dating someone not in med school if I were gone all the time," Dixit said. "We've both learned to be more flexible. We’ve realized you have to do what you want and not wait for the other person." 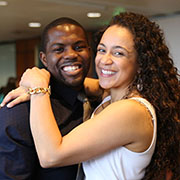 How medical student couples fared on the big day >