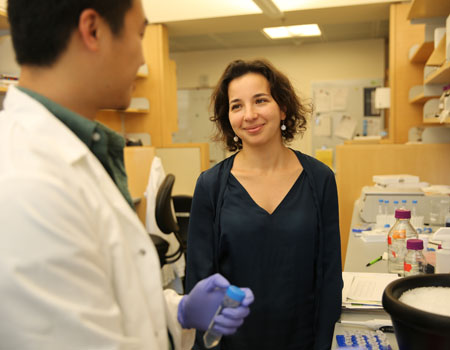 As our whirlwind first year of medical school came to a close, the inaugural Bridges class rapidly dispersed to different UCSF campuses, across the country and around the world. My classmates are spending their summers participating in an incredibly diverse bounty of activities, including spending time with family, shadowing physicians, getting married(!) and engaging in public health research abroad.

For the MD/PhD students like myself, we are in a lab during our summer between the first and second year of medical school. Like other graduate students, MD/PhD students do a few short rotations in a few different labs to help them figure out where they ultimately want to do their thesis work. I was thrilled to get a chance to work with Anna Molofsky, MD, PhD. Her lab’s research focus fascinates me, and for the first time, I am working in a lab led by a woman. I spent a lot of the summer working with research tools that I had rarely or never worked with before: rodents, cell cultures, viruses, the statistical software R, and I was so very lucky to work with a lab team that was happy to help me out when I inevitably forgot where the petri dishes were (again).

This was also an exciting summer for Dr. Molofsky. She was recently recognized as a 2017 Pew Biomedical Scholar, which is a prestigious award for early-career investigators. All of us in the lab are delighted for her - it an honor she undoubtedly deserves.

Dr. Molofsky received her undergraduate degree in neuroscience and chemistry from Amherst College, and her MD and PhD from the University of Michigan. Coming to UCSF as a resident was a dream fulfilled for Dr. Molofsky and her husband, Ari Molofsky, MD, PhD, who is a UCSF immunologist ("UCSF is the best place in the world for neuroscience and immunology," she said). After residency, she completed a postdoctoral fellowship at UCSF and joined the UCSF faculty in 2015.

When asked what brings her the most joy, Dr. Molofsky said, “I love working with students. My favorite day is Friday because I have all of my one-on-one meetings. It’s so exciting to move beyond only one set of data that you’re generating to look at all of these different sets of data that different people are generating. That’s the best part: the direct mentorship, creating the science with people, with mentees and colleagues. Collaborating is great at UCSF.”

Recently, I got the chance to sit down with Dr. Molofsky and asked her a few questions about her research and her life outside of the lab. Below is a condensed and edited interview. 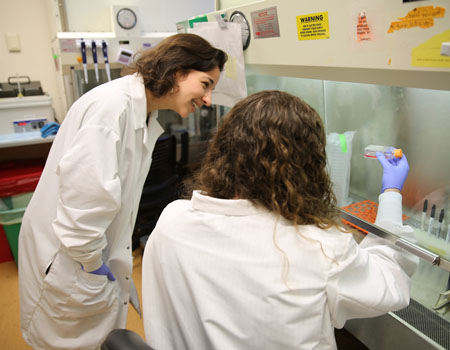 Marci (MR): When did you first start thinking that you’d like to pursue a career as a scientist?

Anna (AVM): In college, I started out as a physics major, and I really enjoyed my science classes. I ended up [double majoring in neuroscience and chemistry] - my college was one of the few that had a Neuroscience program. A lot of the time I wasn’t thinking about things so much in terms of a career and where I was going to go with it. I feel like one has a career in science only without noticing. And other careers that I contemplated, like writing or music, just didn’t come as naturally to me.

MR: So what intrigued you about neuroscience, and when did you switch to that in college?

AVM: My first research experience was at the National Institutes of Health in the National Institutes of Neurological Disorders and Stroke. I think I was always interested in the brain. I can’t remember anymore why, other than that it seemed like the most complex organ and the seat of consciousness and thought and so forth. You kind of wonder why everyone’s not interested in the brain! So, that was my first undergraduate research experience. I studied CaM Kinase II, which is a calcium-binding protein involved in learning and memory. When I went back to college [after that research experience], I decided to be a neuroscience major, [but] I dabbled in other things over time. Because most of what I was doing in that lab was biochemistry, I joined a muscle lab for a year because they also studied calcium binding proteins. I found that the big picture of why you’re doing science matters a lot, even if the day-to-day work is the same. It always mattered a lot to me that I was dealing with the brain and brain diseases.

MR: What was the best personal and/or professional advice you received in the course of your educational training (or life)?

It totally changed my conception of myself as a scientist. I’m not a neat person necessarily in my personal life, but one can learn these things. And the other thing [my graduate mentor] used to always say was that you should never be limited by a technique. You should keep your eye focused on the question, and then your ability to do the experiment and use the right techniques will follow. 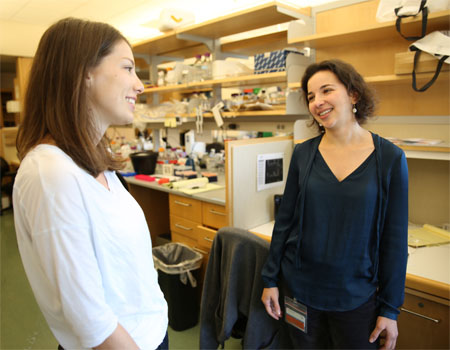 MR: Give me the elevator pitch for the research your lab does and why it matters to society.

AVM: I’m a psychiatrist, and one of the hardest things about psychiatric disease is that even though it causes such severe disability to our patients, it’s very difficult to figure out where the brain dysfunction lies. I’ve always been intrigued by looking at the brain in a different kind of way, not looking at the usual suspects, but looking in unexpected places. As a postdoc, I became really interested in glia, because they make up almost half of the brain, and yet, almost no neuroscientist wants to study them.

We want to look in unexpected places for where brain dysfunction might be. Glia play an integral role in brain development and synapse formation, and they’re modulators of brain development. If we can understand how glia might be dysfunctional in the development of the normal brain, we’ll be able to understand these subtle abnormalities that give rise to severe psychiatric diseases of neurodevelopment, like autism and schizophrenia. One area that our lab is especially interested in is how glia serve to communicate between the immune system and the developing brain.

MR: Tell me a bit about your clinical practice, and how being a psychiatrist influences the research your lab does.

AVM: Even when your day-to-day work is running a gel or purifying a protein or sectioning a mouse brain, the big picture of why you’re doing things is what drives the science forward. And so for me, the big picture of understanding brain function and dysfunction is what drives my interest in the scientific questions that we ask. I’m moved by the difficulty of treating psychiatric diseases. A lot of times, when my patients say ‘I don’t like this medication. I don’t like the side effects,’ I say ‘I agree with you. I wish we had something better.’ Science can be very thankless and laborious, and so it helps to have the big picture in mind. I think it’s important that our basic questions are motivated by areas of interest that are relevant to disease.

When I work with patients, one of the things that has most struck me is how huge of an influence early developmental events have on the adult brain. This has driven my interest in postnatal brain development and how the brain matures in response to experiences.

MR: When you started your lab two years ago, what aspects of the lab environment did you feel it was most imperative you focus on from the get-go?

AVM: It was really fun starting a lab. The most important thing is getting a good team of people together. The best part about running a lab is feeling like you’re creating a lab culture. And that is what I thought about the most, and continue to think about. I have models from my own previous training, things that I think are important: a shared culture, a shared sense of values, and a shared goal. We have shared protocols and people collaborate instead of working in little silos independently.

MR: How do you make it through a negative moment as a scientist, like getting negative results?

AVM: A lot of dealing with negative results is realizing that that’s a natural part of the cycle and not taking it personally. One good piece of advice that I got from my postdoc mentor was ‘you won’t get 90% of the grants you apply for.’ With science, you start to realize that failure is part of the process. So having some perspective, having some confidence in yourself, your intuition and your nose for a good question are really important.

MR: In a different life, one in which you weren’t in science or medicine, where do you think life would have taken you by now?

AVM: For a while, I thought about being a musician - I play the cello. But I wasn’t good enough. So if I had done that, I would probably be teaching music, which would be fun. One of my first jobs was working at an insurance agency filing papers. I used to look at people poised at the door at 4:59, and that is the one thing that I would never want, is to not love what I’m doing. I’ve been passionate about science and medicine for so long that it’s hard to imagine. But there were times in my life when I was pretty passionate about music and poetry and physics. I think you end up doing what you’re good at and what you’re passionate about.