Examining the Link Between Early-Stage Dementia and Criminal Behavior 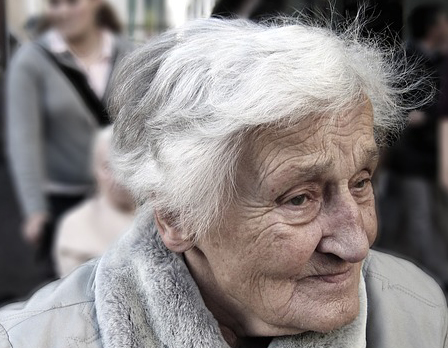 Among the middle-aged and elderly, the sudden appearance of criminal behavior may be an early sign of brain illness.
Photo: pixabay/geralt

At the grocery store, an 83-year-old woman fills her cart with items to donate to a food bank. When she realizes that the store does not have donation bins, the woman exits the store without paying and wheels the food-filled cart to a donation center across the street.

Another woman likes to wander through the neighborhood where she successfully enters several homes. Although she is arrested for trespassing and the authorities warn her not to return, the 59-year old persists.

Are these behaviors crimes? Is it still a crime if the person has a brain disease?

In the March 2015 issue of JAMA Neurology, research published by UCSF Memory and Aging Center (MAC) faculty and others shows a potential link between neurodegenerative disease and new-onset criminal behavior. The authors studied reported criminal conduct in patients with frontotemporal dementia (FTD) and Alzheimer’s disease (AD) and concluded that the sudden appearance of illicit behavior in adults might be an early indicator of brain disease.

Madeleine Liljegren, MD, PhD candidate at Lund University in Sweden and the paper's first author commented, “The consequences for these individuals are many and often devastating. Because of their aberrant behavior, they could get fired from work, their spouse may divorce them and they may even end up in jail. It is important that society and healthcare professionals pay attention and react to these deviant behaviors and help the affected persons to see a doctor.”

Criminal behavior was defined as acts that violate the law, as well as those that deviate from appropriate social conduct and could potentially lead to legal consequences. The study’s results found that new criminal behaviors tend to appear with specific neurodegenerative diseases. 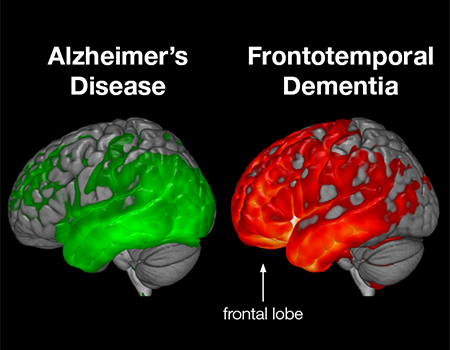 An analysis of MRI data showing the pattern of brain tissue loss in Alzheimer’s disease (green) and frontotemporal dementia (red). Executive functions help people judge and plan behavior and are located in the frontal lobes, one of the areas hardest hit by frontotemporal dementia.
Image courtesy of: Howie Rosen, Jonathan Elofson, Gabe Marx and Faye McKenna

Patients diagnosed with FTD showed the highest frequency of criminal behaviors, while those with AD had the lowest rate. FTD patients were the most commonly reported group to authorities for their crimes.

The study sheds light on how and why these sudden misbehaviors emerge. Violence, both verbal and physical, occurred more frequently in diseases that affect frontal brain circuits responsible for behavior monitoring, like FTD. Conversely, patients diagnosed with AD—which affects brain areas that are responsible for memory—showed less violence and more instances of poor judgment, resulting in penalties such as traffic violations.

Study author and UCSF neurologist Dr. Georges Naasan emphasizes how vital it is for “the medical and judicial systems to recognize and evaluate criminal behaviors that emerge anew in middle-aged and older adults and constitute a deviation from their prior personality.” Dr. Naasan says that “these [changes] may at times represent the first signs of a brain illness,” and argues that these cases should therefore be handled differently than those in which a person has a healthy brain.

If an adult trespasses or steals, but has FTD, what are the appropriate legal repercussions? When cognitive tests show normal function, these patients become especially vulnerable within the legal system.

The traditional insanity defense requires that those being prosecuted do not understand the wrong in their actions, but because behavioral variant frontotemporal dementia (bvFTD) patients have shown the ability to recognize and verbalize inappropriate behaviors, they may fail to meet the requirements for this defense.

While some patients with neurodegenerative disease can conceptually distinguish right from wrong and understand the potential consequences of delinquency, many have difficulty controlling their own behaviors.

This study provides a scientific basis from which legal systems can begin to understand possible medical links to new-onset criminal behavior in older adults.