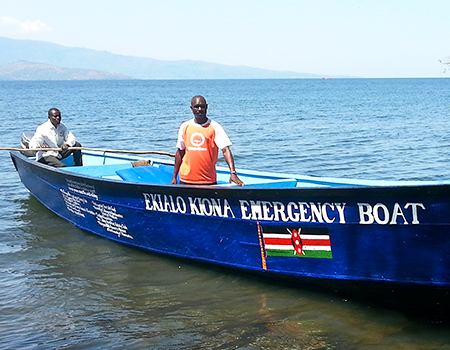 The only Emergency Ambulance Boat serving the Kenyan side of Lake Victoria, launched by Organic Health Response in July 2014.
Photo: Lily Muldoon

In January 2014, I joined my fellow fourth-year UCSF medical student Jesus Granados to travel to Mfangano Island in Lake Victoria, Kenya, to conduct a regional health resource assessment. The information would be used to determine the acute health needs and capabilities on the island and to inform the design of an effective emergency response protocol.

We found that the residents had two fundamental problems when an emergency occurred: no access to nearby urgent care services and no care coordination network. Without a hospital on this remote island, located over an hour by boat from the mainland of Kenya, patients experienced devastating delays in receiving urgent medical care. Some patients would attempt to haggle for passage with private boats or wait for the infrequent ferry to get to a mainland hospital. Even more distressing, some would not even attempt to get care. In the event of a medical emergency, such as a mother hemorrhaging during labor, there was no central number to call, no one with medical knowledge available to respond, and no one to advocate for the patient if she made it to the hospital.

To tackle these and other health problems on the island, UCSF School of Medicine graduate Chas Salmen, MD, founded the Organic Health Response (OHR) in 2009.

Through a series of local and global partnerships, OHR equips residents on Mfangano Island with resources, training and connections to respond to the socioeconomic, epidemiological and ecological challenges the population faces. The organization began as a focused effort to construct a solar-powered Internet-capable computer center to promote HIV testing on Mfangano Island, where the prevalence of HIV is greater than 30%. Today, OHR is home to a variety of activities, including the Health Navigation and Emergency Response program launched in 2014. 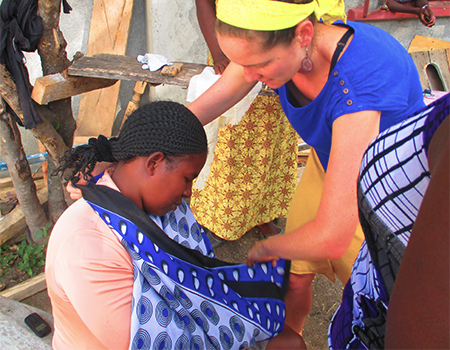 Supported by the UCSF Global Health Pathways Program, I was able to return to Mfangano Island for two months in the summer of 2014 to set up a formal collaboration with the Kenyan Ministry of Health and to train the first responders. Community health workers participated in a five-day curriculum to become health navigators. They learned how to provide first aid, coordinate the swift response of the Emergency Ambulance Boat, communicate advance notice to mainland facilities and ensure that each patient reaches definitive care with follow-up within three days of the emergency incident.

Recognizing that the majority of urgent cases involve labor and obstetric complications, OHR is developing an approach that focuses on maternal health. Now health navigators engage with pregnant women in the villages they serve to develop “Safe Birth Plans.” Together, they design a course of action to ensure delivery in a health facility and to recognize danger signs before and during labor.

Being prepared for emergencies is vital, as I experienced firsthand. A few days after the official launch of the Emergency Ambulance Boat, we were transporting a mother already in labor who required a blood transfusion for severe anemia. Halfway through the hour-long transport to the mainland, her contractions increased, and we were forced to deliver her baby in the boat. We are happy to report that the mother and infant reached care safely.

Success Model for Other Islands

January 2015 marks the end of a six-month pilot in which the health navigators took action in 64 emergencies, providing care and transport to ailing infants, women in labor, traumatic injuries and patients weakened by infectious disease. Based on the success of the Health Navigation and Emergency Response program, designs are underway to expand the program to include not just all of Mfangano but also adjacent islands.

Emergencies occur everywhere, everyday and rural populations are often unable to access urgent care in a timely fashion. By deploying health navigators and an emergency ambulance boat to provide transport, access and advocacy are now available to patients on Mfangano Island. Today, when an infant suffers a seizure from severe malaria, the family has a number to call to get their child to life-saving treatment, even in the middle of the night.