Becoming a Parent and a Doctor: The Journey to Graduation 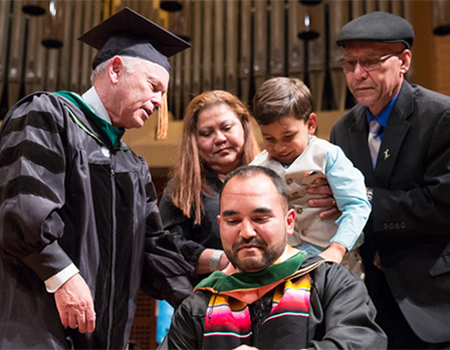 Marvin Miranda is hooded by his son Elias, with his parents and Interim Dean Bruce Wintroub lending a hand.
Photo: Elisabeth Fall

Medical school is arduous, and parenthood is even more daunting. Combining them seems almost unthinkable, but many students are making it work.

The UCSF School of Medicine commencement on May 19 at Davies Symphony Hall included a number of graduates from the Class of 2015 who have successfully managed to turn into parents and doctors.

Amelia Castro, in fact, had two babies while she was in med school. Nolan is now 3 and Jack is 6 months old.

"What I didn't expect was that I'd find parenting harder than medicine," she said. "With medicine, there's a lot of evidence behind it and you work with a team and you're always making decisions together. With parenting, I could screw up these totally innocent beings and not even realize it until it's too late. And they're challenging ­­– they're opinionated, needy little humans."

But Castro and her husband, who's in the software industry, have survived, although it took her an extra year to graduate.

Parenthood was one of the themes in Tuesday night's keynote commencement speech by Peter Chin-Hong, MD, a professor of medicine at UCSF who specializes in treating infectious diseases. Just before he started medical school, his father died suddenly. He drew on that loss for strength and inspiration as a physician and teacher.

Chin-Hong grew up in a remote village in Trinidad, a wildly multicultural country. When he left, he had an identity crisis. It was subsiding when he lost his dad – a shopkeeper who was "at once father and mother and social worker and confidant" to villagers. They showed up in staggering numbers to pay their last respects.

"Every group mourned him in their own special way... just like the way he communicated with them when he was alive," Chin-Hong said.

"Although this gave me a clue, it was only as a doctor in San Francisco that it all came together," he said. "UCSF was a microcosm of all the best that San Francisco – and arguably the world – had to offer, filled with zany, brilliant, creative, committed and socially conscious denizens. It was a medical Disneyland, and I desperately wanted to become a cast member."

At the end of his rollicking speech – in which he danced and played songs by Bob Marley and David Rudder – Chin-Hong urged the 179 members of the Class of 2015 to "forge a path but stay true to each one of your roots, to each of your previous lives, your Christmases past. My success has been in culling each of the different pieces of who I am when it makes sense. That makes me connect more authentically and passionately with each of my patients, and with each one of you." 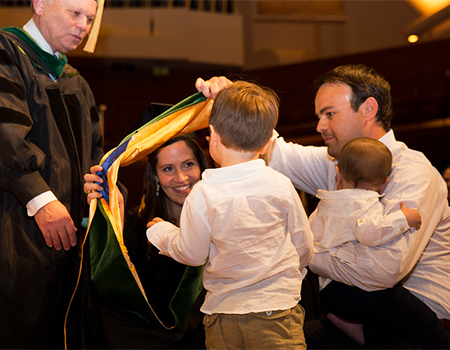 Amelia Castro at her hooding with her husband and sons Nolan and Jack.
Photo: Elisabeth Fall

At least 20 of the newly minted doctors from the Class of 2015 will be going into pediatrics or family medicine. Amelia Castro is one of them. On June 11, she'll begin her pediatrics residency at Kaiser Oakland. She knows that mixing motherhood and medicine will become even tougher.

"A lot of times it's not pretty," said Castro, 34, who managed radiology facilities for eight years before starting med school. "You cry a lot and you doubt a lot. It's not ideal. But you get these amazing kids, and I can't imagine not having them. So you do it day by day."

She lives in Redwood City, which has meant five years of long commutes. But that's been useful at times.

"I'm definitely an introvert, so I require a lot of me time," Castro said. "It's harder when you have kids. I don't know the last book I've read or the last time I sat in a coffee shop. A lot of those restorative things are super important and really hard to fit in. I have to find other ways to get that quiet in my life, so I do a lot of podcasts and books on tape while I'm driving."

Castro said her husband is a remarkable partner – capable of "flying solo, except for breast milk" – and UCSF has been extremely supportive, flexible and accommodating.

"There's a culture in medicine of feeling you have to be superhuman and go it alone," she said. "But you need to make your struggle known and to find allies."

Cricket Fisher found a strong ally in Maxine Papadakis, MD, associate dean for students and professor of medicine at UCSF.

"Dr. Papadakis was a great person for me," said Fisher, 31, who is expecting a daughter at the end of June and whose son, Tate, is almost 2. "She had a lot of sage advice, and consistently helped me negotiate what's best for my career and my family life in a way that's true to my values."

Papadakis emphasized that it would be an excellent idea to clear Step 1 (the U.S. Medical Licensing Examination) before delivering a baby. That made sense to Fisher.

After Step 1, she said, medical school becomes much more piecemeal, and "you can cut and paste the requirements" and shift things around. Although Fisher entered UCSF with the Class of 2015, she'll graduate next May because she took four months off with her son and will take another seven months when her second baby arrives. Students who are thinking about starting a family often ask her for advice.

She tells them that waiting until they become attending physicians might be ideal – with more income and flexibility, less grueling hours and a schedule that may be more predictable. But not everyone has the luxury of time. Fisher and her husband, a fitness and recreation supervisor at UCSF, didn't want to wait, especially because she'd spent years as a sociology researcher and was starting med school late.

"There's something about trying to get pregnant that makes it seem like we have more control," Fisher said. "But I remind students that lots of people do this without planning, and they find a way to make it work." 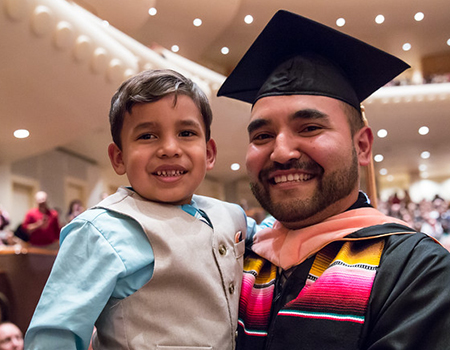 Meeting the Challenges of Single-Parenting

Marvin Miranda is a good example. He unexpectedly became a parent in May 2010, a few months before starting medical school at UCSF, and then a single father after he and the baby's mother broke up at the end of his first year. His son, Elias, just turned 5.

"It's been extremely difficult but it's also the best thing I've ever done," said Miranda, 33. "It's helped me grow exponentially as a person, but balancing everything has been hard. Now that I'm at the tail end, it seems doable. But at the time I didn't know if I was going to get through it."

Miranda has done more than just get through it. He acquired an MPH degree from UC Berkeley in 2014, his name is on four publications, he's been heavily involved with the Latino Medial Student Association, and he's consistently done outreach and attended conferences aimed at getting more underprivileged kids into STEM fields.

He said parenthood has compounded the "humungous sacrifices" that med school requires. His social life is "kind of dead." Three years ago, he moved back home with his mother in Pinole. She and his two sisters have helped care for his son, but it means his round-trip commute is two to three hours a day. He doesn't sleep much, has stopped going to the gym and doesn't watch TV except for cartoons with Elias.

"I had to let go of some things, especially the notion that I had to be his everything," Miranda said. "And I wasn't good with asking for help. I try to do everything on my own. And I'm always dealing with guilt – when I'm studying, maybe I should hang out with him more, versus when I'm with him, I'm thinking maybe I should be studying more."

Miranda, a first-generation college student, was born in Nicaragua but moved to the United States at age 3 when his family was granted political asylum. He said he was a very competitive Type-A perfectionist, who always wanted to win.

After a year as an internal medicine resident at Highland Hospital in Oakland, Miranda will move to Boston for a three-year physical medicine and rehabilitation residency at Harvard. Elias will spend a year with his mother, a med student at UC Davis, until she matches into a residency. At that time, Elias' parents will decide the best way to move forward.

Being a parent has affected Miranda's choice of specialty. He was leaning toward surgery, but decided instead to look at more "family-friendly" fields. 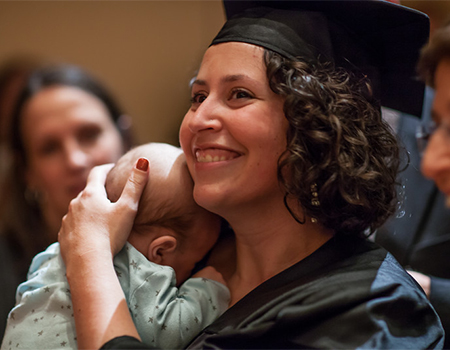 Julia Shalen is perhaps the newest parent in the Class of 2015. Her son, Finn, was born on March 26, and he attended his mother's graduation.

"He pretty much goes where I go," said Shalen, 30, who loves kids and spent two years as a special education kindergarten teacher in Oakland. She's staying at UCSF as a pediatrics resident.

She and her husband both have lots of family in the Bay Area, which she said makes parenthood less overwhelming. Shalen also planned ahead as much as she could, getting many requirements out of the way in her third year, and is glad that she did.

"Even sitting down for an hour to work on a poster is tough to do when someone is demanding all your attention all the time," she said. "It definitely makes it hard to focus on anything else."

She brought Finn to class several times during a three-week capstone course, and she said people were wonderful. "Nobody was minding too much if he cried for a few minutes," Shalen said. "And a lot of my classmates are also having children. So it's nice to be able to figure out what's working for people and share hand-me-downs and equipment and advice."

UCSF has day-care centers at its Parnassus, Laurel Heights and Mission Bay campuses. In September, Finn will start attending the one at Laurel Heights. "Residency is harder than medical school, but it's easier in the sense you're finally doing what you want to be doing," Shalen said.

"I've learned to be a little more relaxed about schedules," Shalen said. "Finn certainly doesn't stick to any sort of schedule I've set for him."

Fisher said it's reinforced her appreciation for maximizing time. "You realize how efficiently you can do tasks that used to take you a lot longer. Now I can clean my apartment in 20 minutes. I thought, 'What have I been doing all these years?' But there definitely has to be a strategy."

She pumped breast milk all through her third year during breaks in her rotations, keeping refrigerated packs at home and work. Sometimes she'd nap or work while pumping. She fits in exercise by bicycling to the hospital or jogging to the playground with her son. Meals are planned in advance. And she said there's a rigid cutoff, usually around 8 p.m., when work ends and time with her husband begins.

"There's not a whole lot of space for whatever normal humans do," Fisher said. "But my son is absolutely incredible. Some days it was really hard when I'd leave the house before he woke up and come home after he went to sleep, and just know that there was allegedly another creature in the world drinking all this milk."

There were also times when it was a difficult day in the hospital, which made coming home an even more cherished moment.

"Sometimes I'd come home and pick him up out of bed and hold him in the rocking chair for a little while," Fisher said. "Because I needed that."