Amplifying Leadership for the Future

Marshmallows and strands of dry spaghetti might seem out of place at a gathering of faculty, staff and leadership from UC San Francisco School of Medicine and the greater campus, but it turns out that those simple ingredients provide a powerful metaphor for the challenges of leadership.

Participants in the 2017 School of Medicine Leadership Retreat were asked to compete in teams to build the tallest, freestanding, marshmallow-topped structures in eighteen minutes, using only spaghetti, a bit of string and tape. The exercise generated a buzz of planning and a construction frenzy that yielded a range of spindly structures, many of which toppled as the crowning marshmallow was added. 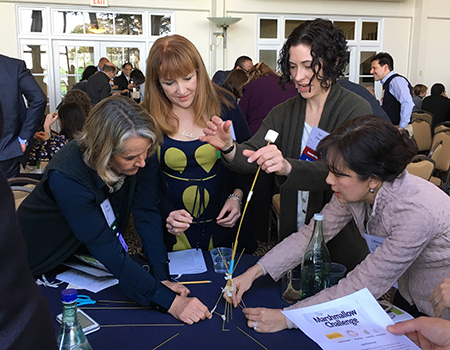 The “Marshmallow Challenge,” originally presented in a TED talk more than a decade ago, reveals some insightful lessons about the nature of collaboration as teams work together to quickly respond to the task.

Designed by a team led by Vice Dean for Education Catherine Lucey, MD, this year’s retreat was held January 5 and 6 in the Presidio. These annual retreats gather UCSF deans, faculty and staff from the School of Medicine and from the Schools of Dentistry, Nursing and Pharmacy, the Graduate Division and UCSF Health. About half of the participants were invited junior faculty and staff flagged by peers as emerging leaders.

The goals of this retreat were to reach a common ground about what leadership strategies will best advance UCSF’s goals and national impact; to identify strategies that foster leadership abilities at all levels; and to experiment with leadership tools and tactics to address current and anticipate future institutional challenges.

“To solve our challenges, we must think differently about leadership,” said School of Medicine Dean Talmadge E. King, Jr., MD, in his opening remarks. King went on to discuss offering creative outlets for emerging leaders to give them the opportunity to make an impact, and fostering diversity in new leadership to build resilience for all of UCSF. 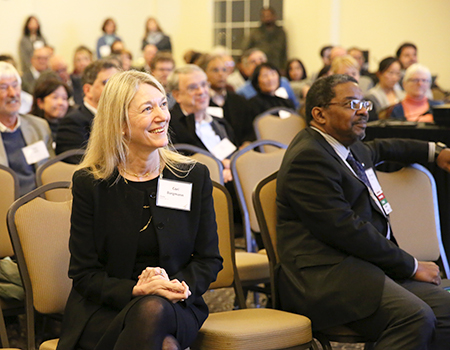 The Power of Many

The tone for creative problem-solving was set the previous evening in a plenary talk by Cori Bargmann, PhD, president of science at the Chan Zuckerberg Initiative, as she outlined the program’s $3 billion investment in increasing scientific knowledge to cure, prevent or manage all diseases by the end of this century.

As Bargmann presented an overview on what was required to advance biomedical research, a pervasive thread was the need for collaboration between different groups of scientists to solve the complex problems facing modern medicine.

Some of Bargmann’s ideas resonated the next day with retreat participants and presenters. Panelist Matthew Bucknor, MD, assistant professor of radiology and a 2015 John A. Watson Faculty Scholar, referenced her discussion of what a medical research institution could learn from the Silicon Valley beyond fundraising.

“Cori discussed the culture of failure, and we have a problem with failure,” said Bucknor. “There is a lingering shame about making mistakes.” He suggested creating a safe space to fail, with an eye to the process of experimentation that eventually leads to big successes. He also called upon leaders to talk openly about their failures en route to success, so that their junior faculty can learn from them.

Eight other presenters outlined what they see as current challenges, ranging from the defense of the importance of science itself and re-thinking who UCSF’s allies may be during this time of political change, to the practical financial realities of how to reward administrative excellence and offset the Bay Area’s high cost of living.

Judy Young, MPH, underscored the value of staff contributions in leadership, especially in institutions as diverse and spread out as UCSF (a “behemoth institution,” in King’s words).

“As we continue to grow, collaboration between faculty and staff is separating,” said Young, who is the assistant director of the UCSF National Center of Excellence in Women's Health. The challenge, she said, is in learning how to listen to staff for understanding with a willingness to be influenced, and inviting staff to decision-making conversations early in the process, rather than at the time of implementation or fixing problems.

In a summary of the perspectives from the front lines of medicine, Professor of Family and Community Medicine Coleen Kivlahan, MD, MSPH, noted a powerful quote, usually attributed to George Orwell: “In a time of universal deceit, the most revolutionary act is to tell the truth.”

In later comments, Lucey revisited this quote: “Fundamentally, truth-telling is about sense-making,” said Lucey. “Understanding the signals from the environment and figuring out which are true and which are false is one of the major responsibilities of those who have aspirations to, or are sitting in positions of leadership.” 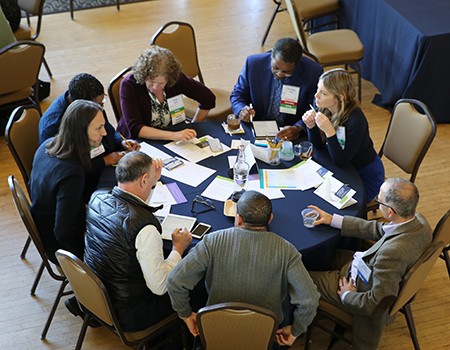 The retreat’s activities were framed around four pillars of the work of leadership. The marshmallow challenge illustrated the concept of “Relating,” or how to connect with others and strengthen relationships, rather than win arguments. The panel discussions painted a picture of the current trends, emerging issues and relationships that affect UCSF in “Sensemaking.” A series of innovative exercises demonstrated the power of “Visioning” and “Inventing” in discovering changes that are possible and bringing the vision to reality.

Crowd sourcing was used to imagine a five-year vision statement for the School of Medicine along with bold ideas – the bolder the better – that could begin to address change immediately. In three dynamic exercises, participants generated creative ideas for a vision statements and bold ideas, and the top handful were selected for hammering out logistics of implementation through facilitated small group discussions.

At the end of the day, amid a wide range of backgrounds and concerns, lively discussions and exercises, the consensus seemed to be a feeling of positive forward motion in addressing the range of challenges raised.

Associate Clinical Professor of Pediatrics Lee Atkinson-McEvoy, MD, said she was encouraged by what she heard about listening with the intent of understanding. “I saw that happening today, by virtue of the themes that came up at this retreat, our leadership… are really listening to the feedback,” noting that at no point were participants told what they would accomplish during the day. “It feels really good to be at a place where we are heard and where important issues to individuals become important issues for the whole.”

“I was very happy to hear some of the ‘big ideas’ that the attendees were offering around support and inclusion for staff career paths, leadership opportunities and engagement, said Cristina Morrison, who oversees change management and facilities for the School of Medicine Dean’s Office. “I was also inspired by folks thinking about space, releasing space and modernizing Parnassus, which are all topics I care very deeply about.”

In the next several weeks, the retreat committee will consider the generated ideas, and develop projects that apply creative solutions to current challenges.

In closing remarks, King reiterated his commitment to addressing the issues raised throughout the day, to sort out what it takes to balance collaboration with action and create an environment where broad input is sought without curtailing forward motion. “We are committed to listening to you and learning from you, to do what is best to continue to make this place the outstanding place that it is,” he said. 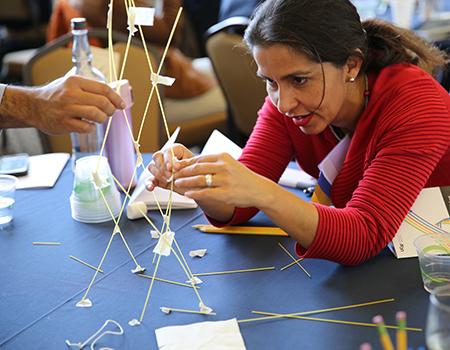 Read "In Praise of the Incomplete Leader" (10 min)

Watch one or more of the following TED talks on leadership (15-20 min):

— How to Manage for Collective Creativity with Linda Hill (17 min)

— Forget the Pecking Order at Work with Margaret Heffernan (16 min)