In 1876, Lucy Maria Field Wanzer became the first woman to graduate from the UCSF School of Medicine (then known as the Medical Department of the University of California).

When Lucy Wanzer applied to the Medical Department of the University of California in 1873, she was rejected. Throughout the nation, female medical students were few and far between, and no medical school west of the Rocky Mountains had ever admitted a woman.

But committed to her childhood dreams of becoming a doctor, Wanzer appealed the decision. After a four month long process, the Regents of the brand new University of California finally let her in, passing a resolution that “women offering themselves for admission and passing the required examination must be received to all the privileges of the Medical Department.” This resolution would set a precedent for generations to come of female medical applicants to UC medical schools.

“Dr. Wanzer’s contributions to UCSF and American culture vis-à-vis women’s rights cannot be overstated,” said Dr. Robert Sherins, a member of the UCSF School of Medicine Class of 1963. “Her life was so inspiring to me that I decided to publish an updated iteration of her biography.”

This iteration appears in the 50th Reunion Memory Book that Dr. Sherins recently compiled for his class reunion in April. With nearly 20 years of experience doing family genealogical research, Dr. Sherins set out to write a historically accurate biography of Dr. Wanzer. The final product was a full chapter of material that Dr. Sherins obtained from civil archives, newspaper and academic journal articles, and UCSF archival images. The Reunion Book is available in Archives & Special Collections at the UCSF Library.

Dr. Sherins’ research reveals that Wanzer’s first few days in medical school were not so easy. At the start of the year, the dean of the school had encouraged her male classmates to haze her. Many of her 26 classmates followed, playing pranks on her and trying to scare her during anatomy dissections.

Unfazed, Wanzer continued going to class, where she faced discrimination by her professors. One instructor told her that a woman had no business studying medicine, and that if one did, she ought to have her ovaries removed. To this, Wanzer allegedly replied, “Then men students ought to have their testicles removed.” In the obstetrics clinic, Dr. R. Beverly Cole warned her that the material he was about to teach would be embarrassing to her and suggested that she excuse herself. When she insisted on staying, an impressed Dr. Cole took her on as his mentee.

Eventually, Wanzer also won over her male classmates when she refused to rat them out to the administration for a prank they’d pulled on a fellow student. Over the next few years in school, her classmates and teachers treated her with respect and consideration as an equal in education.

Lucy Maria Field Wanzer graduated in 1876 with the first official class of the Medical Department of the University of California (today’s UCSF School of Medicine). However, her problems as a pioneer for women in medicine were far from over. 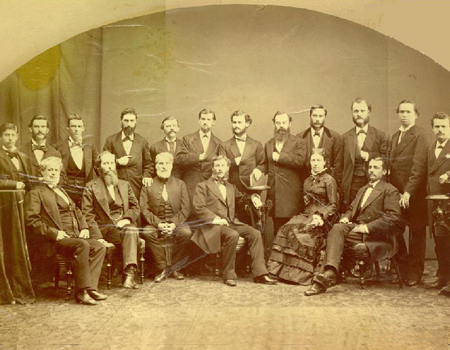 UCSF’s first graduating Class of 1876. Dr. Lucy Wanzer is in the front row, 2nd to right.

Upon graduation, Dr. Wanzer had to fight for admission to the San Francisco County Medical Society. This time, however, she was backed by her UCSF mentor Dr. Cole, and she soon became the first woman to be elected to the Society. She went on to open a private clinic on Geary Street, specializing in obstetrics and gynecology as well as pediatrics. She was elected the Vice President of the UCSF Alumni Association in 1885 and eventually served as an attending at the Children’s Hospital of San Francisco.

Many women would follow the precedent set by Dr. Wanzer. In 1920 (44 years after Dr. Wanzer’s graduation), when women won the right to vote, about 10% of each UCSF graduating class was female, far ahead of the national average of 4%. Moreover, it would take many medical schools well into the mid-20th century to start accepting women.

Today, women actually outnumber men at the UCSF School of Medicine; women made up 56% of matriculants this year, compared to a national average of 47%. In his article, Dr. Sherins included a detailed analysis of female graduates of the UCSF School of Medicine through the years since its founding. “The trends of the past decades show pretty clearly that the UCSF administration and faculty have a very certain view of their responsibilities vis-à-vis gender equality,” he suggested.

And it all started with the first female medical graduate in 1876. “Dr. Lucy Wanzer contributed to the local and national awareness of women's rights by successfully doing what she knew best, taking good care of her patients and being recognized for her many efforts.”